The Beautiful Mysterious: The Extraordinary Gaze of William Eggleston (Hardcover) 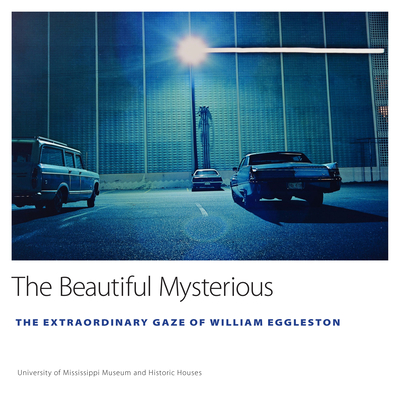 The Beautiful Mysterious: The Extraordinary Gaze of William Eggleston (Hardcover)

By University of Mississippi Museum and His, Ann J. Abadie (Editor)


On Our Shelves Now
Contributions by Megan Abbott, Michael Almereyda, Kris Belden-Adams, Maude Schuyler Clay, William Dunlap, W. Ralph Eubanks, William Ferris, Marti A. Funke, Lisa Howorth, Amanda Malloy, Richard McCabe, Emily Ballew Neff, Robert Saarnio, and Anne Wilkes Tucker The Beautiful Mysterious: The Extraordinary Gaze of William Eggleston is an examination of the life and work of the artist widely considered to be the father of color photography. William Eggleston was born in 1939 and grew up in the Mississippi Delta town of Sumner. His innovative 1976 exhibition at the Museum of Modern Art in New York helped establish color photography as an artistic medium and has inspired photographers and artists around the world. Edited by Ann J. Abadie, the catalog contains fifty-five Eggleston photographs, thirty-six that were featured in The Beautiful Mysterious exhibition at the University of Mississippi Museum from September 2016 to February 2017. Eggleston's longtime friend William Ferris, a celebrated folklorist, donated all the photographs to the Museum. The photographs range from 1962 into the 1980s, representing each of Eggleston's projects during that time. Some of the photographs are inscribed with Eggleston's rare handwritten notes about location, people, dates, and projects. Eight of Eggleston's early dye transfers are in the collection. Many of these works had not been on public display before this exhibition, including black-and-white images that are unique-copy single prints. This is a penetrating examination of the influence of the Mississippi Delta and the American South on Eggleston's work and of Eggleston's influence on photography and other creative fields.
Ann J. Abadie is former associate director of the Center for the Study of Southern Culture at the University of Mississippi and coeditor of numerous scholarly collections from the Faulkner and Yoknapatawpha Conference.