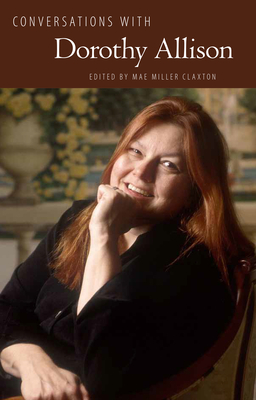 Since the publication of her groundbreaking novel, Bastard out of Carolina, Dorothy Allison (b. 1949) has been known--as with Larry Brown and Lee Smith--as a purveyor of the working-class, contemporary South. Allison has frequently used her position, through passionate lectures and enthusiastic interviews, to give voice to issues dear to her: poverty, working-class life, domestic violence, feminism and women's relationships, the contemporary South, and gay/lesbian life. Often called a "writer-rock star" and a "cult icon," Allison is a true performer of the written word.

At the same time, Allison also takes the craft of writing very seriously. In this collection, spanning almost two decades, Allison the performer and Allison the careful craftsperson both emerge, creating a portrait of a complex woman.

In the absence of a biography of Allison's life, Conversations with Dorothy Allison presents Allison's perspectives on her life, literature, and her conflicted role as a public figure.

Mae Miller Claxton is professor at Western Carolina University. She is coeditor of Conversations with Ron Rash and Teaching the Works of Eudora Welty: Twenty-First-Century Approaches, both published by University Press of Mississippi.