Crooked Snake: The Life and Crimes of Albert Lepard (Paperback) 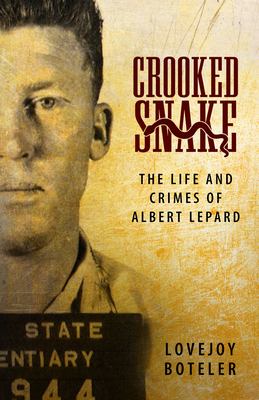 Crooked Snake: The Life and Crimes of Albert Lepard (Paperback)

In 1968, during Albert Lepard's fifth escape from a life sentence at Parchman Penitentiary, he kidnapped Lovejoy Boteler, then eighteen years old, from his family's farm in Grenada, Mississippi. Three decades later, still beset by half-buried memories of that time, Boteler began researching his kidnapper's nefarious, sordid life to discover how and why this terrifying abduction occurred.

Crooked Snake: The Life and Crimes of Albert Lepard is the true story of Lepard, sentenced to life in Parchman for the murder of seventy-four-year-old Mary Young in 1959. During the course of his sentence, Lepard escaped from prison six times in fourteen years.

In Crooked Snake, Boteler pieces together the story of this cold-blooded murderer's life using both historical records and personal interviews--over seventy in all--with ex-convicts who gravitated to and ran with Lepard, the family members who fed and sheltered the fugitive during his escapes, the law officers who hunted him, and the regular folks who were victimized in his terrible wake.

Throughout Crooked Snake, Boteler reveals his kidnapper's hardscrabble childhood and tracks his whereabouts before his incarceration and during his jailbreaks. Lepard's escapes take him to Florida, Michigan, Kansas, California, and Mexico. Crooked Snake captures a slice of history and a landscape that is fast disappearing. These vignettes describe Mississippi's countryside and spirit, ranging from sharecropper family gatherings in Attala County's Seneasha Valley to the twenty-thousand-acre Parchman farm and its borderlands teeming with alligator, panther, bear, and wild boar.

Lovejoy Boteler spent his early years on Riverdale Farms in Grenada County. He worked for the Mississippi legislature, as a deck hand on the Mississippi River, and in a rodeo in Colorado. Boteler has also taught construction technology and instrumental music in public schools. He builds custom furniture.