PTSD & Moral Injury: The Journey to Healing Through Forgiveness (Paperback) 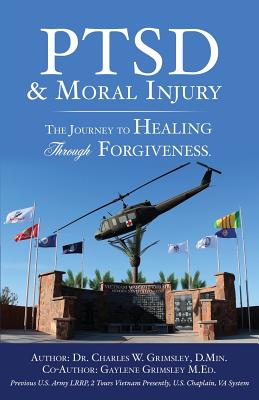 PTSD & Moral Injury: The Journey to Healing Through Forgiveness (Paperback)


Usually Arrives in Store in 1-5 Days
Charles W. Grimsley is a 2 tour Viet Nam Army LRRP. He is a U.S. Chaplain working at a Veterans Health Care System facility. Charles has been facilitating a Spirituality Group working with veterans from all branches of service for several years. While working with the veterans at the hospital he noticed a correlation between those who managed to conquer their addictive behaviors when they actively implemented Spirituality and the forgiveness components; the forgiveness of self and others. Charles earned his Doctorate from Denver Seminary with emphasis in Marriage and Family Counseling. While writing his Doctoral Thesis he developed a group study of combat veterans diagnosed with PTSD to prove the validity of his thesis. Past and present returning combat veterans exhibit symptoms of PTSD: Addictions are rampant, uncontrolled anger, horrifying memories and stories. Drug therapy does not seem to be effective. Post-traumatic stress disorder (PTSD), traumatic brain injury (TBI), and depression are frequent diagnoses among combat veterans. Emerging symptoms of PTSD, TBI, and depression often go unrecognized or may be slow to develop (Milliken et al., 2007) and not addressed until problems become critical. "When 20 veterans die by suicide and 14 veterans hadn't touched VA care, it means that we can't do this alone." Dr. Caitlin Thompson, Executive Director VA Office of Suicide Prevention. Veterans from all eras continue to struggle with issues related to their combat experience and reintegration to civilian life following military service. 23% of women veterans report at least one sexual assault while in the military. Yes, help awaits.... It is not in the forgetting that the answer lies, but in the remembering that healing manifest itself, yet utilizing the forgiveness component. It is the matter of unlocking the unconscious, to open the awareness, thus the work to be done is buried within and entails the Journey of Freedom through forgiveness, necessitating and connecting applications of; Theology, Psychology, and Spirituality.