Much Ado About Baseball (Hardcover) 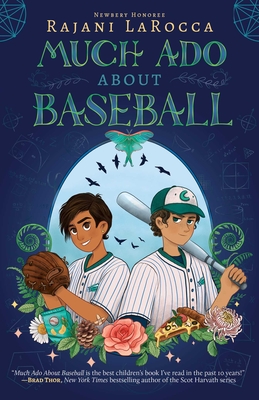 Much Ado About Baseball (Hardcover)


On Our Shelves Now
"Much Ado About Baseball is the best children's book I've read in the past 10 years!" -Brad Thor, New York Times bestselling author of the Scot Harvath series

"A moving tale of baseball, magic, and former rivals who come together to solve a problem." -Kirkus Reviews, STARRED REVIEW

In this companion novel to Midsummer's Mayhem, math and baseball combine with savory snacks to cause confusion and calamity in the town of Comity by Newbery-Honor winner Rajani LaRocca.

Twelve-year-old Trish can solve tough math problems and throw a mean fastball. But because of her mom's new job, she's now facing a summer trying to make friends all over again in a new town. That isn't an easy thing to do, and her mom is too busy to notice how miserable she is.

But at her first baseball practice, Trish realizes one of her teammates is Ben, the sixth-grade math prodigy she beat in the spring Math Puzzler Championships. Everyone around them seems to think that with their math talent and love of baseball, it's only logical that Trish and Ben become friends, but Ben makes it clear he still hasn't gotten over that loss and can't stand her. To make matters worse, their team can't win a single game. But then they meet Rob, an older kid who smacks home runs without breaking a sweat. Rob tells them about his family's store, which sells unusual snacks that will make them better ballplayers. Trish is dubious, but she's willing to try almost anything to help the team.

When a mysterious booklet of math puzzles claiming to reveal the "ultimate answer" arrives in her mailbox, Trish and Ben start to get closer and solve the puzzles together. Ben starts getting hits, and their team becomes unstoppable. Trish is happy to keep riding the wave of good luck . . . until they get to a puzzle they can't solve, with tragic consequences. Can they find the answer to this ultimate puzzle, or will they strike out when it counts the most?
Rajani LaRocca was born in India, raised in Kentucky, and now lives in the Boston area with her wonderful family and impossibly cute dog. She earned a BA and an MD from Harvard, and spends her time writing novels and picture books, practicing medicine, and baking too many sweet treats. Midsummer's Mayhem was her debut novel. Find her online at RajaniLaRocca.com and on Twitter and Instagram @rajanilarocca.
Much Ado About Baseball is the best children's book I've read in the past 10 years!
— Brad Thor, New York Times bestselling author of the Scot Harvath series

A middle schooler struggles to adjust after moving to an idyllic Massachusetts town.

Trish Das is at a crossroads. Not only is the 12-year-old unhappy that her family has moved yet again due to her mother's cardiology career, she also has to try out for a new baseball team. The fact that one of her new teammates is a former archrival further complicates matters. Math prodigy Ben Messina went head-to-head against fellow math whiz Trish at last spring's Math Puzzlers Championship. When Trish emerged victorious, Ben was stunned. The two get closer when the team's mysterious pregame snacks start making everyone play better while also causing magical side effects during games. Equally surprising are the cryptic puzzle booklets Trish and Ben receive in the mail that lead them to even more wins. But as the puzzles get harder to solve, the risk of failing to do so increases. Alternating between Trish's and Ben's perspectives, LaRocca's novel-a companion to 2019's Midsummer's Mayhem-is a Much Ado About Nothing homage that explores parental expectations, complicated friendships, and teamwork. The protagonists' love of problem-solving shines through, and the puzzles themselves are clearly explained. As a third-generation Indian American, Trish also has moving conversations about the circumstances that led her grandparents to emigrate and how those decisions still impact their lives. Ben is implied White. Final illustrations not seen.

A moving tale of baseball, magic, and former rivals who come together to solve a problem.
— Kirkus Reviews, STARRED REVIEW

Baseball provides energetic context to this story in alternating voices of friends in a lovingly drawn and diverse community. Add magic, numbers, Shakespeare, and lashings of mystery, all seasoned with artful sprinkles of culinary flavor and equal parts humor and heart. Cleverly adjacent to the world of Midsummer's Mayhem, yet standing wonderfully well alone.
— Uma Krishnaswami, author and Astrid Lindgren Award nominee

It's no mystery why Rajani LaRocca's Much Ado About Baseball is a home run. Like the smell of freshly cut infield grass, this fast-paced story of friendship, fitting in, and finding yourself is filled with magic and math. It pops with baseball excitement and summer days full of possibilities.
— David A. Kelly, author of the Ballpark Mysteries series