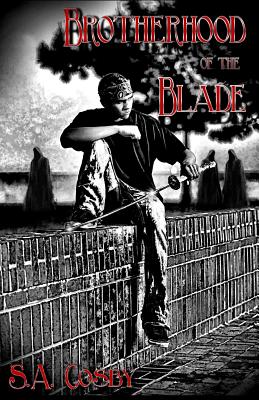 "We are the Men of the Brotherhood. Let our blades strike true..." His entire life, Catlow Creedence has been told that he is different. While other boys his age could indulge in youthful pursuits Catlow was forced to learn the "Way of the Sword". His friends prepared for summer vacations and college boards while Catlow prepared for battle, a battle he doubts will ever take place. His family is the heir to an inheritance of blood and steel. They are unheralded defenders of mankind. They are warriors of uncommon honor and incredible skill. They are the "Brotherhood of the Blade". All Catlow wants is to be an ordinary teenager yet his father, legendary sword maker and swordsman Pretlow Creedence has other plans. Pretlow has dedicated his life to the Brotherhood and their sacred covenant, a covenant striving to defend mankind from themselves. As omens and portents begin to manifest the coming of the Judges, Pretlow realizes his son has lost faith in their duty as well as their destiny. Their enemies are poised to emerge from the shadows, forcing Pretlow to ask himself: is it too late? Danger encircles with assassins around every bend. Father and son find themselves fighting not only their sworn enemies (Men of the First Chaos) but each other as well. Can they repair their fractured relationship before it is too late? From the pastoral countryside of Virginia to the stunning vistas of Bavaria to the ancient hills of Greece Shawn A. Cosby weaves a complex story of honor and duty; of fathers and sons; of love and loss; and places the fate of the world balanced on the edge of a sword.

S.A.Cosby is a writer and poet originally from Mathews County. A fan of fantasy and scifi since an early age S.A. started writing in high school and continued during his studies at Christopher Newport University where he majored in English. His short story "The Rat and the Cobra "will be published by Thug-Lit.com in their tenth online issue. He is currently finishing up his second novel "The Brotherhood of the Blade: The Covenant". He lives in Gloucester with his pug .... Pugsley.