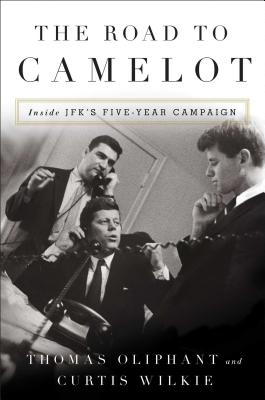 By Thomas Oliphant, Curtis Wilkie
$28.00
Email or call for price.

“A must-read for fans of presidential history.” —USA TODAY

“Terrific…a tougher and more balanced account of the long campaign than anybody’s written yet.” —The Christian Science Monitor

A behind-the-scenes, revelatory account of John F. Kennedy’s wily campaign to the White House, beginning with his bold, failed attempt to win the vice presidential nomination in 1956. A young and undistinguished junior plots his way to the presidency and changes the way we nominate and elect presidents.

John F. Kennedy and his young warriors invented modern presidential politics. They turned over accepted wisdom that his Catholicism was a barrier to winning an election and plotted a successful course to that constituency. They hired Louis Harris—a polling entrepreneur—to become the first presidential pollster. They twisted arms and they charmed. They lined up party bosses, young enthusiasts, and fellow Catholics and turned the traditional party inside out. The last-minute invitation to Lyndon B. Johnson for vice president in 1956 surprised them only because they had failed to notice that he wanted it. They invented The Missile Gap in the Cold War and out-glamoured Richard Nixon in the TV debates.

Now acclaimed, award-winning journalists Tom Oliphant and Curtis Wilkie provide the most comprehensive account, based on a depth of personal reporting, interviews, and archives. The authors have examined more than 1,600 oral histories at the John F. Kennedy library; they’ve interviewed surviving sources, including JFK’s sister Jean Smith, and they draw on their own interviews with insiders including Ted Sorensen and Arthur Schlesinger, Jr.

From the start of the campaign in 1955 when his father tried to persuade President Johnson to run with JFK as his running mate, The Road to Camelot reveals him as a tough, shrewd political strategist who kept his eye on the prize. This is one of the great campaign stories of all time, appropriate for today’s political climate.

Thomas Oliphant is a Pulitzer Prize–winning journalist and Washington columnist for The Boston Globe. A regular commentator on PBS NewsHour, he is the author of four books, including The Road to Camelot. Al Franken says “Oliphant brings more to the table than anyone I know.” Madeline Albright called him “the Will Rogers of our times.” Doris Kearns Goodwin wrote that his book Praying for Gil Hodges was a “small masterpiece.”

“Two of our most gifted reporters have found the perfect subject to match their love of politics, their interviewing skills, and their literary talents. The result is a freshly told, endlessly riveting story that captures the reader every step along the way.”
— Doris Kearns Goodwin, author of The Bully Pulpit and Team of Rivals

“Oliphant and Wilkie’s evocative, behind-the-scenes account goes beyond what we knew from Teddy White and others about how a youthful senator beat the political establishment and won the presidency. Their portrait of Kennedy shows him to be “part gambler but also part cold realist” whose political instincts served him well and broke new ground in presidential campaigns that his successors have followed.”
— Susan Page, Washington Bureau chief, USA TODAY

“The Road to Camelot grabs you on the first page and never lets go. Two of our country’s finest journalists, take us deep inside John F. Kennedy’s at once old-fashioned and brilliantly innovative political operation and show how it made him president. Along the way, they teach us a lot about our country. This book is a gift to history, to all who love politics, and to anyone who likes a good story, brilliantly told.”
— E. J. Dionne Jr., author of the New York Times Bestseller Why The Right Went Wrong

“A spellbinding story of the brash young scion of a wealthy Catholic family plotting his way to the presidency. Kennedy created the modern campaign while cajoling the canny and still-controlling party bosses. Though we know the ending, it’s a nail-biting and well-told tale.”
— Cokie Roberts, author and political commentator for ABC News and NPR

“Two of the best political reporters around tell the story of an ambitious young senator who would not wait his turn and changed all the old rules to become our 35th president. The Road to Camelot is a wonderful narrative of the self-driven campaign of the man who became President Kennedy. An exciting time. A great read.”
— Richard Reeves, author of President Kennedy: Profile of Power and President Reagan: The Triump of Imagination

“An excellent chronicle of JFK's innovations, his true personality, and how close he came to losing.”
— Kirkus Reviews, starred review

“The exciting and illuminating tale of John F. Kennedy’s calculated run for the presidency . . . a very compelling account of a landmark election.”
— Booklist, starred review

“An in-depth narrative based on oral histories, personal interviews, and secondary sources. . . . The authors add a new perspective to literature on Kennedy by focusing on his electioneering efforts rather than his persona and policy outcomes.  This book will interest everyone from history buffs to those nostalgic for the days of favorite-son candidates to readers interested in contested conventions.”
— Library Journal

“The Road to Camelot brings much new insight to an important playbook that has echoed through the campaigns of other presidential aspirants as disparate as Barack Obama and Donald Trump. The authors take us step by step on the road to the Kennedy victory, leaving us with an appreciation for the maniacal attention to detail of both the candidate and his brother Robert, the best campaign manager in American political history."
— The Washington Post

"Oliphant and Wilkie excel here in taking the accepted knowledge of Kennedy's rise, debunking some of the conventional wisdom (such as Joe Kennedy's role as his son's Svengali) and adding new details that provide a richer history of our 35th president....The authors' knowledge of politics, campaigns and the presidency crackles off each page. They touch all the Kennedy bases here....a must-read for fans of presidential history."
— USA Today

“A conscientiously-researched and terrific new book . . . a tougher and more balanced account of the long campaign than anybody's written yet. . . . The book's account of the actual 1960 presidential campaign is as gripping and dramatic as anything Sorensen himself might have written in its interplay of political insight and personal interplay. . . . "The Road to Camelot" is in essence a reminder and perhaps a bit of a surprise: This is the story of John Kennedy making all the decisions and calling all the shots, a man in complete control of his message and his campaign – the chief architect of his own victory.”
— The Christian Science Monitor

“Splendid . . . a gripping, authoritative campaign history, every bit the successor to Theodore White’s classic work, The Making of the President 1960.”
— The Boston Globe

"[A] provocative reconstruction of his 'five-year campaign' for the White House."
— The New Yorker

“The book is most impressive for its meticulously detailed approach to the fierce Kennedy drive toward the ultimate goal of the presidency.”
— The Washington Times

“The two former Boston Globe reporters argue that JFK's campaign was much more than the year-long affair depicted in Teddy White's The Making of the President 1960, a classic of political journalism that won the Pulitzer Prize. . . . The book offers new detail on how Johnson ended up as vice president after Kennedy clinched the nomination.”
— CNN

“Thomas Oliphant and Curtis Wilkie — two veterans of The Boston Globe — supply a fresh and fascinating account in The Road to Camelot. . . . a detailed account that balances admiration with criticism.”
— Richmond Times-Dispatch

“The most compelling book on JFK in the year of his centennial.”
— The Daily Beast

“Thomas Oliphant and Curtis Wilkie, both veteran political journalists, retell the story of this momentous campaign, reminding us of now forgotten details of Kennedy’s path to the White House.”
— The Wall Street Journal

“This is an important work for any JFK student or fan....Put this one on your book shelf–you'll want to return to it often."
— Buffalo News