The Road to Camelot: Inside JFK's Five-Year Campaign (Paperback) 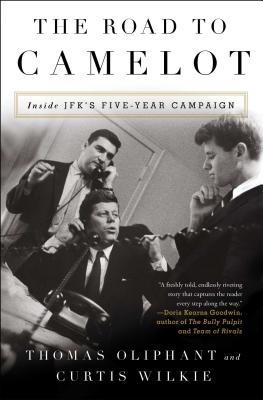 The Road to Camelot: Inside JFK's Five-Year Campaign (Paperback)

Johnny, we hardly knew ye.  That is so true of John Kennedy, who has become more myth than substance in many cases, which is a shame because the reality is so much more interesting.  In a journalistic and historical tour de force the authors delineate the intensity, focus and highly structured organization that implemented the tactics and strategy that brought him the 1960 Presidential nomination.  It was a campaign that forever changed American politics and its relevance carries through to the present.

— From Bill's 2017 Picks
A “provocative reconstruction of John F. Kennedy’s ‘five-year campaign’ for the White House” (The New Yorker), beginning with his bold, failed attempt to win the vice presidential nomination in 1956 and culminating when he plotted his way to the presidency and changed the way we nominate and elect presidents.

John F. Kennedy and his young warriors invented modern presidential politics. They turned over accepted wisdom that his Catholicism was a barrier to winning an election. They hired Louis Harris to become the first presidential pollster. They twisted arms and they charmed. They turned the traditional party inside out. They invented The Missile Gap in the Cold War and out-glamoured Richard Nixon in the TV debates.

Now “Thomas Oliphant and Curtis Wilkie, both veteran political journalists, retell the story of this momentous campaign, reminding us of now forgotten details of Kennedy’s path to the White House” (The Wall Street Journal). The authors have examined more than 1,600 oral histories at the John F. Kennedy library; they’ve interviewed surviving sources, including JFK’s sister Jean Smith, and they draw on their own interviews with insiders including Ted Sorensen and Arthur Schlesinger, Jr.

From the start of the campaign in 1955, “The Road to Camelot brings much new insight to an important playbook that has echoed through the campaigns of other presidential aspirants as disparate as Barack Obama and Donald Trump. The authors take us step by step on the road to the Kennedy victory, leaving us with an appreciation for the maniacal attention to detail of both the candidate and his brother Robert, the best campaign manager in American political history” (The Washington Post). “A must-read for fans of presidential history” (USA TODAY), this is “an excellent chronicle of JFK’s innovations, his true personality, and how close he came to losing” (Kirkus Reviews, starred review).
Thomas Oliphant is a Pulitzer Prize–winning journalist and Washington columnist for The Boston Globe. A regular commentator on PBS NewsHour, he is the author of four books, including The Road to Camelot. Al Franken says “Oliphant brings more to the table than anyone I know.” Madeline Albright called him “the Will Rogers of our times.” Doris Kearns Goodwin wrote that his book Praying for Gil Hodges was a “small masterpiece.”