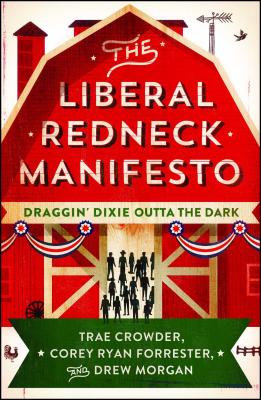 By Trae Crowder, Corey Ryan Forrester, Drew Morgan
List Price: $18.99
Our Price: $17.00
(Save: $1.99 10%)
On Our Shelves Now
The Liberal Rednecks—a Southern-based stand-up comedy group known for their scathing political satire—celebrate all that’s good about Dixie while leading a progressive revolution toward a New South.

The American South is home to some of the best music, cuisine, athletics, whiskey, and weather the country has to offer, but its reputation as a haven for its “right-wing, Bible-beatin’, assault-rifle-totin’” citizens precedes it—and, according to the Liberal Rednecks, rightfully so. Yet, as they explain it, the situation in the South is far more complex than “hypocritical, nose-up-in-the-air Yankees” give it credit for. And they should know—they are native sons.

Whip-smart, hilarious, and incisive, the Liberal Rednecks are lifelong, down-home Southern boys who aren’t afraid to call out the outdated traditions and intolerant attitudes of their native land—while also shining a proud light on the most misunderstood region of the country. Their mission: to provide a manifesto for young progressives south of the Mason-Dixon line to rise up and claim their homeland—without abandoning the best of their culture.

Exploring race, class, guns, religion, drug addiction, alcoholism, and homophobia, the Liberal Rednecks tell it like it is while challenging stereotypes at every turn. Fresh, funny, and surprising, The Liberal Redneck Manifesto gives us a vision of Dixieland as it exists now—and what it could become.
Trae Crowder grew up in rural Tennessee and has been writing and performing comedy for six years while also working for the federal government. He was the first person in his family to graduate from college and earn an MBA. After his Liberal Redneck videos went viral, he appeared on a number of television and radio shows. He lives in East Tennessee with his wife and two young sons.

Corey Ryan Forrester has been writing and performing stand-up comedy since he was sixteen and hails from North Georgia. He helped his mother and sister run their family bakery in his hometown of Chickamauga while hawking jokes at night in dingy bars and has an affinity for Southern wit and storytelling.

Drew Morgan is a stand-up comedian, writer, and husband from rural East Tennessee. He draws on his experiences as a small-town son of a preacher man and former public defender to weave together stories with jokes and observations on culture, religion, and identity. He splits time between New York City and Knoxville, Tennessee, with his wife Andi and dog Mick Jagger Pup.
“Being from the south, it’s refreshing to know that I’m not alone in thinking like this. These are the kind of guys I’d be happy to debate them on politics OR college football OR drinking OR foreign policy, they’re well versed in all.”
— Roy Wood, Jr., correspondent “The Daily Show with Trevor Noah”

"It's become so convenient to label places 'Blue States' and 'Red States'. Those terms ignore millions of folks who live in these places, people like Trae, Drew and Corey. Don't get me wrong, these boys are country as hell, but they step to the table with fresh voices and challenge stereotypes at every turn."
— George Wallace, comedian

“For anyone who wants new perspectives on some old held beliefs about what it means to be redneck, read this book and enjoy the laugh-out-loud journey.”
— Jim Rich, Editor-in-Chief

"Trae Crowder zigged when you thought he would zag. The self-proclaimed 'Liberal Redneck' turned the image of the bigoted redneck upside down."
— Knoxville News-Sentinel

"Makes more sense than just about every Republican in Congress"
— Patheos