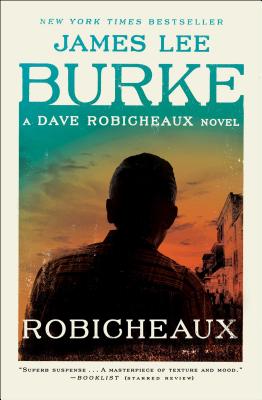 James Lee Burke returns with his most famous character, the tortured but noble Louisiana detective Dave Robicheaux. The past is always present in
Burke's novels and often the only justice attained is that of a rough, natural variety. Some have called him America's best novelist and certainly few can match his lyrical, evocative prose. To classify Mr. Burke in the crime fiction genre is criminal in itself as he is a complete master of the craft and for those who have never read him, be prepared for an unforgettable experience.

Dave Robicheaux is a haunted man. From the acts he committed in Vietnam, to his battles with alcoholism, to the sudden loss of his beloved wife, Molly, his thoughts drift from one irreconcilable memory to the next. Images of ghosts pepper his reality. Robicheaux’s only beacon remains serving as a detective in New Iberia, Louisiana.

It’s in that capacity that Robicheaux crosses paths with powerful mob boss, Tony Nemo. Tony has a Civil War sword he’d like to give to Levon Broussard, a popular local author whose books have been adapted into major Hollywood films. Then there’s Jimmy Nightengale, the young poster boy of New Orleans wealth and glamour. Jimmy’s fond of Levon’s work, and even fonder of his beautiful, enigmatic wife, Rowena. Tony thinks Jimmy can be a US Senator someday, and has the resources and clout to make it happen. There’s something off about the relationship among these three men, and after a vicious assault, it’s up to Robicheaux to uncover the truth “in the barn-burner of a climax” (Booklist, starred review).

Complicating matters is the sudden death of the New Iberian local responsible for Molly’s death; namely that Robicheaux’s colleague thinks Robicheaux had something to do with it. As Robicheaux works to clear his name and make sense of the murder, a harrowing study of America emerges: this nation’s abiding conflict between a sense of past grandeur and a legacy of shame, its easy seduction by demagogues and wealth, and its predilection for violence and revenge. “It has been almost five years since James Lee Burke’s last Dave Robicheaux novel, and it was absolutely worth the wait” (Associated Press).
James Lee Burke is a New York Times bestselling author, two-time winner of the Edgar Award, and the recipient of the Guggenheim Fellowship for Creative Arts in Fiction. He has authored forty novels and two short story collections. He lives in Missoula, Montana.
“Burke is known for his lyrical, deeply melancholic prose, and once again it permeates every page of this profoundly elegiac novel. We tend to forget, however, that he is no slouch at plotting and at constructing hold-your-breath action scenes. Both traits are in evidence here, the former in the way he nimbly juggles the multiple strands of his narrative, the latter in the barn-burner of a climax.”—Booklist, Starred Review

“Heaven-storming prose…the intimations of mortality that have hovered over this series for 30 years have never been sharper or sadder.”—Kirkus

“[An] enthralling yet grim novel of crime, hate, and tragedy. … The novel’s murders and lies—both committed with unsettling smiles—will captivate, start to finish.” —Publishers Weekly

"There can be no doubt that the time for America to welcome back a heroic warrior, even a literary one, is now. Burke does not disappoint. He has performed a magic trick possible to only the most imaginative and substantive of writers. He has written a book that is topical, but timeless."—Salon

"Reading one of Burke's novels is truly an immersive experience, with every ache and anguish feeling gut-wrenchingly real. It has been almost five years since the last Dave Robicheaux novel, and it was absolutely worth the wait."—Associated Press

"Burke is what fellow writers call a wordsmith. He can make your eyes water with a lyrical description."—New York Times Book Review

"Burke is at the top of his form, still drawing from the rich material of his family background in Louisiana and Texas as well as his deep knowledge of literature and history. Robicheaux rings with lovely prose and chills with a dark vision of America’s current condition."—Tampa Bay Times