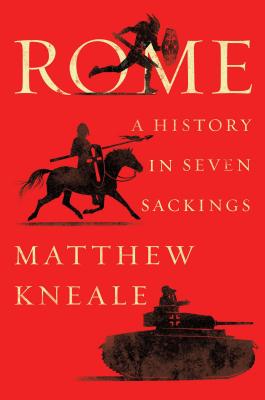 Rome is called the Eternal City and has earned the title through the centuries by enduring numerous threats and invasions, each time rising to further glory. The history of the city is presented through some of those invasions, delineating the changes wrought upon the landscape and culture. From its place as the center of the ancient world through the centuries of being the seat of Christianity and Catholicism to its present incarnation as the capital of Italy Rome is seen in all its glory and also its faults, giving a superb portrait of a city that has done so much to shape Western culture.

"Kneale's account is a masterpiece of pacing and suspense. Characters from the city's history spring to life in his hands." —The Sunday Times (London)

Novelist and historian Matthew Kneale, a longtime resident of Rome, tells the story of the Eternal City—from the early Roman Republic through the Renaissance and the Reformation to Mussolini and the German occupation in World War Two—through pivotal moments that defined its history.

Rome, the Eternal City. It is a hugely popular tourist destination with a rich history, famed for such sites as the Colosseum, the Forum, the Pantheon, St. Peter’s, and the Vatican. In no other city is history as present as it is in Rome. Today visitors can stand on bridges that Julius Caesar and Cicero crossed; walk around temples in the footsteps of emperors; visit churches from the earliest days of Christianity.

This is all the more remarkable considering what the city has endured over the centuries. It has been ravaged by fires, floods, earthquakes, and—most of all—by roving armies. These have invaded repeatedly, from ancient times to as recently as 1943. Many times Romans have shrugged off catastrophe and remade their city anew.

Matthew Kneale uses seven of these crisis moments to create a powerful and captivating account of Rome’s extraordinary history. He paints portraits of the city before each assault, describing what it looked like, felt like, smelled like and how Romans, both rich and poor, lived their everyday lives. He shows how the attacks transformed Rome—sometimes for the better. With drama and humor he brings to life the city of Augustus, of Michelangelo and Bernini, of Garibaldi and Mussolini, and of popes both saintly and very worldly. He shows how Rome became the chaotic and wondrous place it is today. Rome: A History in Seven Sackings offers a unique look at a truly remarkable city.

Matthew Kneale was born in London in 1960, the son and grandson of writers. He studied modern history at Magdalen College, Oxford. He has written five novels, including English Passengers, which was shortlisted for the Booker Prize and won the Whitbread Book of the Year Award, and two nonfiction books. For the last fifteen years he has lived in Rome with his wife and two children. Visit him at MatthewKneale.net.

"This magnificent love letter to Rome comes in the form of a vivid chronicle of the great city’s repeated catastrophes and recoveries.  Sharp-eyed, richly informed, tirelessly curious, and often wryly amusing, Kneale is the perfect Virgil to accompany any pilgrim who wishes to trace the vast spiral that leads from the ancient past to the bittersweet present."
— Stephen Greenblatt Author of The Swerve: How the World Became Modern

“Evokes [Rome] with casual brilliance. . . . The most exciting passages relate the sacks themselves, from motley barbarian armies appearing below the walls (several times in fact) to the horror of Allied bombing raids. . . . There are many other gripping vignettes. . . . this is not a tale of decline and fall so much as a slow roller-coaster ride through the fortunes of a place deeply entangled in its past.”
— Greg Woolf

“Anyone who’s visiting Rome and wants an idea of the ghosts and stories lurking among the ruins could choose no better read.”
— Louis Cheslaw

“The brilliance of [Kneale’s] own raid on Rome lies in the principle of selectivity he has brought to it—what is done to Rome matters as much as what Rome does to the world—and the depth of his research. . . . Kneale [is] one step ahead of most other Roman chroniclers.”
— Aaron Retica

"Rome: A History in Seven Sackings is that rarest of treats:  an erudite history that reads like a page-turner.  With a novelist’s eye for the revealing detail, and the genial grace of your favorite tour guide, Matthew Kneale plunges us into the fascinating palimpsest they call the Eternal City. Magnificently entertaining all around!"
— Maria Semple, author of Today Will Be Different and Where’d You Go, Bernadette

"What’s not to love about a historical book that reads like a novel? Long-time resident (and novelist) Matthew Kneale tells the story of Rome through the lens of seven key battles. . . . You’ll come away with a new understanding of one of the world’s most well-preserved cities, its famed ruins, and the tenacity and pride of its people."
— AFAR Magazine

"Like most very old and very storied cities, Rome has as many scars as trophies.This hard reality is the guiding genius of Matthew Kneale's absorbing new book. . . . [Rome's] long, uneven, colorful history feels new when it's examined this way, through its defeats instead of its victories."
— Steve Donoghue

"Panoramic and deeply researched. . . . Kneale’s love for the city in all its incarnations, past and present, is clear."
— Publishers Weekly

“With an eye for detail and an ear for language, Kneale guides a journey through seven bloody events spanning more than two millennia in the history of the place he knows well, the world’s most fascinating city, Rome. It’s an unforgettable trip.”
— Barry Strauss, Cornell University, author of The Death of Caesar: The Story of History’s Most Famous Assassination

“A sprawling city with an ancient history, Rome defies a neat narrative of its past. Novelist and historian Kneale takes a fresh historical approach by focusing on groups of invaders that indelibly shaped the contemporary city. . . . [He] offers gritty accounts of waves of violent incursions and vivid portraits of daily life. . . . A lively perspective on Rome's rich history.”
— Kirkus Reviews

"Matthew Kneale shapes the span of Roman history into one compelling narrative, focusing on seven historical moments that defined the metropolis that stands today. Whether you're unfamiliar with one of the world's greatest cities or want to see it in an entirely new light, you'll want to take this journey with Kneale as your intrepid guide."
— JPMorgan Summer Reading List

"Kneale's account is a masterpiece of pacing and suspense.  Characters from the city's history spring to  life in his hands."
— Peter Thonemann