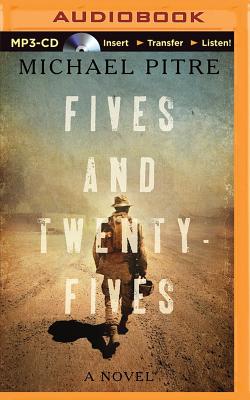 It's the rule--always watch your fives and twenty-fives. When a convoy halts to investigate a possible roadside bomb, stay in the vehicle and scan five meters in every direction. A bomb inside five meters cuts through the armor, killing everyone in the truck. Once clear, get out and sweep 25 meters. A bomb inside 25 meters kills the dismounted scouts investigating the road ahead.

Fives and Twenty-Fives marks the measure of a marine's life in the road-repair platoon. Dispatched to fill potholes on the highways of Iraq, the platoon works to assure safe passage for citizens and military personnel. Their mission lacks the glory of the infantry, but in a war where every pothole contains a hidden bomb, road repair brings its own danger.

Lieutenant Donavan leads the platoon, painfully aware of his shortcomings and isolated by his rank. Doc Pleasant, the medic, joined for opportunity, but finds his pride undone as he watches friends die. And there's Kateb, known to the Americans as Dodge, an Iraqi interpreter whose love of American culture--from hip-hop to the dog-eared copy of Huck Finn he carries--is matched only by his disdain for what Americans are doing to his country. Returning home, they exchange one set of decisions and repercussions for another, struggling to find a place in a world that no longer knows them.

A debut both transcendent and rooted in the flesh, Fives and Twenty-Fives is a deeply necessary novel.