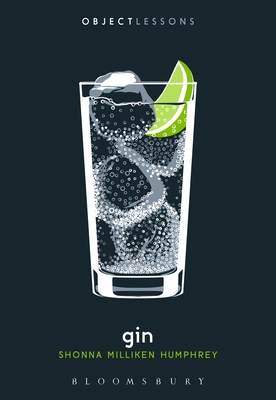 Object Lessons is a series of short, beautifully designed books about the hidden lives of ordinary things.

Gin tastes like Christmas to some and rotten pine chips to others, but nearly everyone familiar with the spirit holds immediate gin nostalgia. Although early medical textbooks treated it as a healing agent, early alchemists (as well as their critics) claimed gin's base was a path to immortality-and also Satan's tool. In more recent times, the gin trade consolidated the commercial and political power of nations and prompted a social campaign against women. Gin has been used successfully as a defense for murder; blamed for massive unrest in 18th-century England; and advertised for as an abortifacient. From its harshest proto-gin distillation days to the current smooth craft models, gin plays a powerful cultural role in film, music, and literature-one that is arguably older, broader, and more complex than any other spirit. Object Lessons is published in partnership with an essay series in The Atlantic.
Shonna Milliken Humphrey is the author of Show Me Good Land and Dirt Roads and Diner Pie. Her essays have appeared in The New York Times, The Atlantic, and Salon. For two years, she was a food writer for The Maine Sunday Telegram. Learn more at: www.shonnahumphrey.com