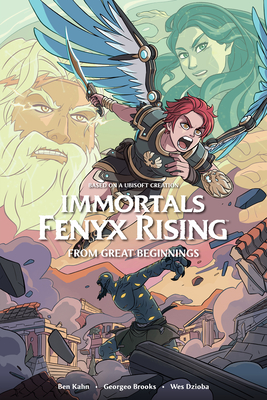 
On Our Shelves Now
Gods must face their past and unite for the legacy of the future in this Greek mythology-inspired graphic novel based on Ubisoft’s video game Immortals Fenyx Rising™!


Fenyx enjoys her new life on Mount Olympos, but when her hometown suddenly gets hit by strange earthquakes, she has to investigate. Back at home, she reunites with her human father—to his shock, he learns that gods are real. Fenyx’s mom, who had kept her godhood under the radar, cautions her that such a life has its drawbacks and things get messy when Zeus makes an appearance. As the earthquakes continue to rupture the earth, dangerous creatures emerge, past foes return, old flames reignite, and history is once again in the making! It’s time for the gods to team up to fight as a family!

Writer Ben Kahn (Gryffen: Galaxy's Most Wanted, Heavenly Blues) and artist Georgeo Brooks (Solving Xandra) take you on a fun, humorous, action-filled adventure through the world of Greek mythology to discover what it truly means to be a god!

Ben Kahn is an Ignatz-nominated writer working in New York City. Ben has been writing for over a decade, with experience in webcomics and video games before beginning their published comic career in 2015.

Ben divides their time between working on their latest comic book projects, and playing with a kitty who would really rather be left alone.

Ben's most recent work includes Gryffen: Galaxy's Most Wanted, Heavenly Blues from Scout Comics and Once Upon A Time Machine vol. 2 from Dark Horse Comics, with more to be annnounced soon.