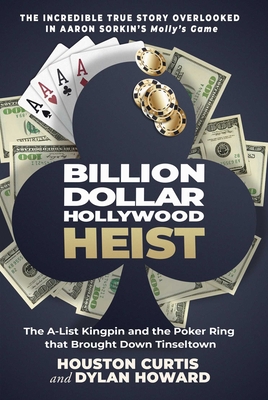 
Email or call for price.
“Right out of the gate, the entire game was designed to empty the pockets of those rich, celeb-loving LA suckers.”—Houston Curtis

What do these people have in common? Not just fame and fortune; all these men are also alumni of the ultra-exclusive, high-stakes poker ring that inspired Aaron Sorkin’s Oscar-nominated film, Molly’s Game.

But Houston Curtis, the card shark who co-founded the game with Tobey Maguire, knows that Sorkin’s is the whitewashed version. In Billion Dollar Hollywood Heist, Curtis goes all-in, revealing the true story behind the game. From its origins with Maguire to staking DiCaprio’s first game, installing Molly Bloom, avoiding the hookers and blow down the hall, and weathering the FBI investigation that left Curtis with a lien on his house, this is the no-holds-barred account of the world’s most exclusive Texas Hold ’Em game from the man who started it—with all the names and salacious details that Molly’s Game left out.

With the insider appeal of Rounders, more A-listers than Ocean’s 11, and the excitement of The Sting, Billion Dollar Hollywood Heist is the untold, insider’s story that makes Molly’s Game look tame.

Houston Curtis has lived a successful double life as both a producer and card mechanic for nearly thirty years. His credits include executive producing gambling related shows such as The Ultimate Blackjack Tour on CBS and pioneering the poker instructional DVD genre with titles featuring poker champs Phil Hellmuth and Annie Duke. Barred from Las Vegas Golden Nugget for "excessive winning" at Blackjack, Houston is one of the world’s most successful card mechanics and sleight-of-hand artists of the modern era. Curtis won the 2004 Legends of Poker championship before co-founding the elite Hollywood poker ring that inspired Aaron Sorkin’s Academy Award-nominated film Molly’s Game.

As a man with unprecedented access to the facts and a reporter who is one of the most feared journalists in Hollywood, investigative reporter Dylan Howard has cracked open scandals that have brought down the careers of Mel Gibson, Charlie Sheen, Hulk Hogan, and Paula Dean and others. Howard’s sense for news saw him rise to become the undisputed most powerful gossip editor in the world, publishing dozens of salacious tabloid magazines each week, including Us Weekly, The National Enquirer, Star, In Touch, Life & Style, RadarOnline.com, and more. Described by the New Yorker magazine’s Jeffrey Toobin as "a tabloid prodigy” and AdWeek as “the king of Hollywood scoops,” Dylan also brought to light: the hate-fueled audiotapes of Oscar-winning actor/director Gibson blasting former girlfriend Oksana Grigorieva; the scandal-plagued death of screen darling Farrah Fawcett; the naming of the mother of Arnold Schwarzenegger’s love child; the demise of star-on-the-rise politician Anthony Weiner; and the Tiger Woods sex scandal. He also broke the story of the A-list high-stakes poker scam that was later made into the Oscar-nominated film Molly’s Game. Most recently, Howard made a name for himself with a stunning exposé of Sheen that revealed Hollywood’s most unapologetic hedonist was HIV positive. It also was a story of extraordinary corruption, violence, lies, intimidation, death threats, and millions of dollars paid out in hush money—a story that he chronicled in a first-person essay for The Hollywood Reporter that AdWeek called “jaw dropping.” In 2011, Howard was named Entertainment Journalist of the Year at the National Entertainment Journalism Awards, where the judges labelled him the "go-to guy for authoritative showbiz news and analysis on cable and over-the air television." Howard lives in New York City.

“I enjoyed reading Billion Dollar Hollywood Heist. I played in some of those games and knew all the players.  While games like those may never happen again in poker history because of this book, I will say, it’s an interesting read.”

"Incredible! I Couldn’t put it down. Billion Dollar Hollywood Heist is a fantastic read that puts you in the game and right in the action thru this rollercoaster of big wins and losses with millions on the table. Curtis is not afraid to name names and takes you into the biggest poker game in the History of Hollywood!”
–Pauly Howard, host of VSiN Follow the Money

“Billion Dollar Hollywood Heist is a book you will not stop reading once you pick it up.  Curtis and Maguire pulled off the greatest card hustle in Hollywood history.  Being the owner of a rival publishing company that releases books steeped in the world of gambling, I admit, this book falls into the ‘ones that got away’ category.”
—Anthony Curtis, Las Vegas Advisor

“Billion Dollar Hollywood Heist is an incredible true story that will amaze you and touch you deeply.  Houston Curtis bares his soul while sharing the highs and lows of running the biggest poker game Hollywood has ever seen.
—John B. Mills, Caravan to Midnight

"Shocking, Alluring and heartbreaking!  In this unforgettable true story, the author lures you into a hypnotic world that most people can only dream about…but Houston Curtis lived it!"
—Wayne Clingman, host of Radio Free Mafia and BlogTalk Radio

"Molly’s Game—pure unadulterated fiction. Not the least bit accurate in any way. I didn't necessarily play in any of Molly’s games, but I have played with and know nearly all the characters in the film. Read Houston’s book if you want to get a more accurate depiction.”

—Haralabos Voulgaris, director of quantitative research and development for the Dallas Mavericks