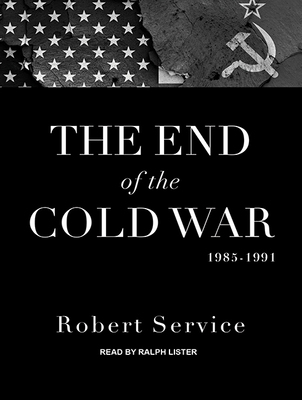 By Robert Service, Ralph Lister (Narrated by)
Email or call for price
Hard to Find - Email or Call for Availability

The Cold War is now consigned to history but many generations can still remember a time when the threat of nuclear war was considerable and there was always the possibility of a true Armageddon. Robert Service has drawn on the astonishing documentation that has become available since the fall of the Soviet Union to present a taut account of how the efforts of statesmen on both sides were able to finally consign the total nuclear threat to oblivion.

The Cold War had seemed like a permanent fixture in global politics, and until its denouement, no Western or Soviet politician had foreseen that an epoch defined by games of irreconcilable one-upmanship between the world's most heavily armed superpowers would end in their lifetimes. Under the long, forbidding shadow of the Cold War, even the smallest miscalculation from either side could result in catastrophe. Everything changed in March 1985, when Mikhail Gorbachev became the leader of the Soviet Union. Just four years later, the Cold War and the arms competition was over. The USSR and the US had peacefully and abruptly achieved an astonishing political settlement. But it was not preordained that a global crisis of unprecedented scale could and would be averted peaceably. Drawing on new archival research, Robert Service's gripping new investigation of the final years of the Cold War-the first to give equal attention to the internal deliberations from both sides of the Iron Curtain-opens a window onto the dramatic years that would irrevocably alter the world's geopolitical landscape, and the men at their fore.