The Senator Next Door: A Memoir from the Heartland (Paperback) 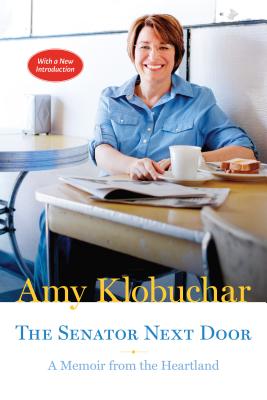 The Senator Next Door: A Memoir from the Heartland (Paperback)

In The Senator Next Door, Minnesota Senator Amy Klobuchar chronicles her remarkable heartland journey, from her immigrant grandparents to her middle-class suburban upbringing to her rise in American politics. At a moment when America's government often seems incapable of getting anything done, Amy Klobuchar proves that politics is still the art of the possible.

Amy Klobuchar, the daughter of a newspaperman and a schoolteacher, is Minnesota’s senior United States Senator.

"Amy Klobuchar’s The Senator Next Door is a must read for public servants across the country. With her trademark Midwestern honesty and humor, she recounts the events that have shaped her life and reminds us that it is still possible, with grit and good will, to work across the aisle to get things done in Washington."—Senator John McCain

"From the halls of her high school all the way to the United States Senate, Amy Klobuchar's journey is one of incredible perseverance and success. Her story radiates with warmth, humor, and candor."—Sheryl Sandberg, author of Lean In

"The Senator Next Door is both a desperately needed wake-up call to our politicians and a delightful memoir that will inspire everyone. Buy one for yourself and give one to an elected official."—Walter Isaacson, author of Steve Jobs and Benjamin Franklin

"I absolutely loved this book and could not put it down. It's smart, funny, moving, and filled with wisdom and insight. The Senator Next Door left me deeply inspired with renewed hope for the American Dream."—Amy Chua, author of Battle Hymn of the Tiger Mother

"The Senator Next Door is about avoiding the sort of blistering rhetoric and political posturing that makes it hard to forge alliances across party lines to get things done."—USA Today

"The Lean In of political memoirs."—The New Republic

"The book is timely because there’s talk of the senator moving to higher office in the future." —Pioneer Press

"If, in these polarized times, you need to boost our faith in democratic politics, this is the book for you." —The Annals of Iowa