Once Upon a Unicorn (Hardcover) 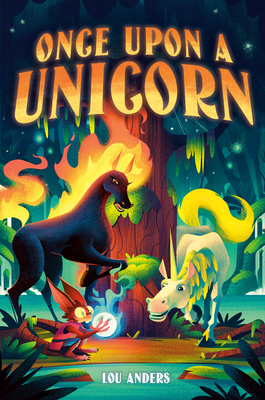 Once Upon a Unicorn (Hardcover)


Email or call for price.
A science-minded unicorn and a (literal) fiery horse team up in this fantasy adventure perfect for fans of Fablehaven and the Wizards of Once series.

Have you ever heard of a unicorn who is more interested in science experiments than magic?

Or a flaming horse who's a walking fire hazard?

When a pumpkin-headed menace called Jack o' the Hunt and monsters untold threaten their home, this unlikely pair must team up to save all of the Whisperwood--and themselves!

Award-winner Lou Anders delivers a fantasy adventure about friendship, fearlessness, and finding your true herd.
Lou Anders drew on his adventures traveling to Greece in his twenties to write Skyborn, combining these experiences with his love of adventure fiction and games (both tabletop and role playing). While he has yet to ride a hippalektryon, creating his own board games for Frostborn, Nightborn, and now Skyborn is one of his favorite indulgences. Anders is the recipient of a Hugo Award for editing and a Chesley Award for art direction, and was named a Thurber House Writer-in-Residence. He has published over 500 articles and stories on science fiction and fantasy television and literature. He resides with his family in Birmingham, Alabama. You can visit Anders online at louanders.com and ThronesandBones.com, on Facebook, on Tumblr, and on Twitter at @Louanders and @ThronesandBones.
Praise for Once Upon a Unicorn:

"Anders tiptoes into Terry Pratchett country with this funny and fresh fantasy steeped in Celtic myth. . . . A distinctive unicorn tale for those seeking a funny-bone tickle." —Kirkus Reviews

"This magical tale is told by a wry, omniscient narrator and explores what it truly means to be a friend regardless of superficial differences." —School Library Journal

"The most delightful fantasy I have read in ages." —Amy Plum, bestselling author of the Die For Me series

"The setting is rich, the characters well-defined, and the danger ever-paramount. It's a strong and thoroughly enjoyable start." —Publishers Weekly, starred review

"Future fans of Tolkien and George R. R. Martin can happily cut their serial-fantasy teeth on this first book of an eventual series." —Kirkus Reviews