Wings of War: The World War II Fighter Plane that Saved the Allies and the Believers Who Made It Fly (Hardcover) 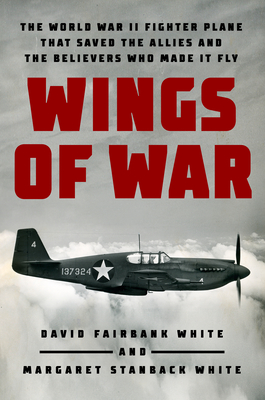 Wings of War: The World War II Fighter Plane that Saved the Allies and the Believers Who Made It Fly (Hardcover)


Coming Soon - Available for Pre-Order Now
The incredible, untold story behind the rise of the P-51 Mustang, the World War II fighter plane that destroyed the Luftwaffe and made D-Day possible

“[A] fascinating book about passion and innovation.”—Walter Isaacson • “An essential book for those who appreciate tales of military bravery, and also for all seeking understanding of decision-making under pressure. A major contribution.”—E. J. Dionne, Jr.

When the P-51 Mustang began tearing across European skies in early 1944, the Allies had been losing the air war for years. Staggering numbers of bomber crews, both British and American, had been shot down and killed thanks to the Luftwaffe’s superior fighter force. Not only did the air war appear grim, but any landing of troops in France was impossible while German fighters hunted overhead. But behind the scenes, a team of visionaries had begun to design a bold new type of airplane, one that could outrun and outmaneuver Germany’s best.

Wings of War is the incredible true story of the P-51 Mustang fighter and the unlikely crew of designers, engineers, test pilots, and army officers who brought it from the drafting table to the skies over World War II. This is hardly a straightforward tale of building an airplane—for years, the team was stymied by corruption within the defense industry and stonewalled by the Army Air Forces, who failed to understand the Mustang’s potential. But when squadrons of Mustangs were finally unleashed over Hitler’s empire, the Luftwaffe was decimated within months, clearing the skies for D-Day. A compelling, character-focused narrative replete with innovation, determination, and bravery, Wings of War is the never-before-told story of the airplane that truly changed the course of World War II.
David Fairbank White studied history at Harvard and worked as a reporter for The New York Times. He has written for national magazines including Fortune, New York, Parade, and Reader’s Digest. Margaret Stanback White received her BA from Harvard. Following a career as a research scientist, she began to freelance as a researcher and editor on nonfiction book projects about scientific breakthroughs and how they have changed the course of history.
“At a critical moment in World War II, the Allies developed a fast and futuristic warplane known as the P-51 Mustang. In this fascinating book about passion and innovation, David Fairbank White and Margaret Stanback White tell the story of the visionary designer who created it and how the Mustang turned the air war and paved the way for D-Day.”—Walter Isaacson, #1 New York Times bestselling author of The Code Breaker and The Innovators

“David and Margaret White are gifted story tellers, intrepid reporters, and tireless detectives who find both clues and insights in archives and frayed documents. In telling the story of a fighter plane and its champions, Wings of War also sheds important light on how the allies prevailed in World War II and saved the democratic world. It's an essential book for those who appreciate tales of military bravery, and also for all seeking understanding of decision-making under pressure. A major contribution.”—E. J. Dionne Jr., New York Times bestselling author of Our Divided Political Heart

“Wings of War soars, with its concise and engrossing history of the development and deployment of a pivotal plane, an aircraft that would change the outcome of WWII. Authors David Fairbank White and Margaret Stanback White portray the action that played out in the air and behind the scenes, making for a terrifically intriguing book.”—Booklist

“The authors enrich the technical details with vivid character sketches and dramatic accounts of the Battle of the Bulge...and other campaigns. Aviation buffs will cheer this high-flying saga.”—Publishers Weekly

“These profiles provide new insight and human interest around the development of the iconic Mustang.”—Library Journal

"Most histories of the P-51 are combat histories, focusing on the plane and its pilots in action. The author delivers that but also delves deeply into the fighter's rocky origins and the struggle to bring the plane to production. The story of Edgar Schmued, the man who designed the P-51 and the later F-86, is fascinating and enriches the understanding of his creation. The tales of many others who brought Schmued's dream to fruition are also revealed in detail."—WWII History Magazine