Once Upon a Goat (Hardcover) 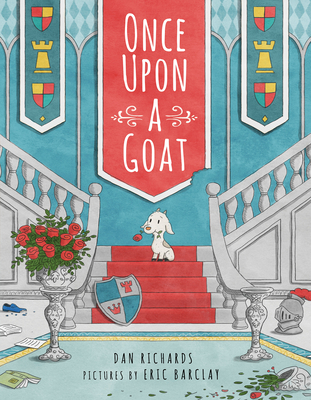 Once Upon a Goat (Hardcover)

“This is an adorable, funny, and heartwarming story of a king and queen who are wishing for a baby. Their fairy godmother wants specifics, so they tell her, ‘Any kid will do!’ But when they look on their doorstep on the next full moon, they are surprised to see a different type of ‘kid’…a fuzzy baby goat! A clever story with the most charming illustrations, this is a must for any reader’s bookshelf!”
— Amanda Zirn Hudson, Bethany Beach Books, Bethany Beach, DE

A twisted fairy tale about a king and queen who wish for a child of their own . . . and end up with a baby goat. Perfect for readers of Children Make Terrible Pets and Wolfie the Bunny.

Once upon a time, a very prim and proper king and queen begged their fairy godmother for a child. They'd prefer a boy, with glowing skin, bright eyes, and two roses for lips . . . but any kid will do. When they find themselves gifted with a baby goat (also known as a kid) instead, they can't imagine how he'll fit into their lives. But of course, it isn't long before he's part of the royal family.

Readers will delight in this story's hilarity, confusion, and celebration of families that come in every shape and size.

"A fresh, amusing, kindhearted picture book."--Booklist, Starred review
"With its gentle morals of acceptance, not judging by appearances, and being open to outcomes different than expectations, this is a lovely family read-aloud."--Kirkus
"The contrast between the royal couple's once-ordered existence and the cheerful mess at book's end is very funny, and the message about acceptance and the expanded definition of family is a bonus."--Horn Book
Dan Richards is a graduate of the University of Washington's Writing for Children Program, where he wrote his debut picture book, The Problem with NOT Being Scared of Monsters (Boyds Mills Press). He is also the author of Can One Balloon Make an Elephant Fly? (Simon & Schuster).

Dan loves telling stories and talking about the craft of writing. School visits make him happy. He lives with his family in Bothell, WA. Learn more about Dan at danrichardsbooks.com or on Twitter at @author_dan.

Eric Barclay is an illustrator, designer, and the author of I Can See Just Fine (Abrams), Hiding Phil (Scholastic), and Counting Dogs (Scholastic). Classic cartoons, modern art, mid-century design, and everyday mishaps heavily influence his style. He's had the privilege of illustrating for Abrams, American Greetings, Disneyland Paris, Hallmark, Highlights magazine, Friend magazine, Scholastic, Westin Kids Club, Papyrus, and many others. He lives in Texas with his wife, two daughters, a dog, and two cats. Learn more about Eric and his work at EricBarclay.com or on Twitter at @EricBarclay.
"A fresh, amusing, kindhearted picture book."—Booklist, starred review