Rolf in the Woods (Paperback) 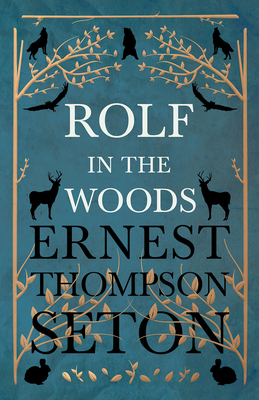 Rolf in the Woods (Paperback)


Usually Arrives in Store in 1-5 Days
(This book cannot be returned.)
First published in 1911, "Rolf in the Woods" is a classic adventure story by Ernest Thompson Seton. It tells the tale of Rolf, a young teenage orphan with nothing to speak of. He works tirelessly on his authoritarian uncle's farm until one day he meets a Native American called Quonab. They become friends and Rolf learns many great life lessons from him, including outdoors survival and self-defence. However, it's not all fun and adventure in this moving coming-of-age novel. Considered to be among the 100 greatest stories ever written, "Rolf in the Woods" is not to be missed by any fiction lover or collector of Seton's seminal work. Ernest Thompson Seton (1860 - 1946) was an English-born Canadian author and wildlife artist who founded the Woodcraft Indians in 1902. He was also among the founding members of the Boy Scouts of America, established in 1910. He wrote profusely on this subject, the most notable of his scouting literature including "The Birch Bark Roll" and the "Boy Scout Handbook". Many vintage books such as this are becoming increasingly scarce and expensive. We are republishing this book now in an affordable, modern, high-quality edition complete with a specially-commissioned new biography of the author.