Depressive Illness: The Curse of the Strong (Paperback) 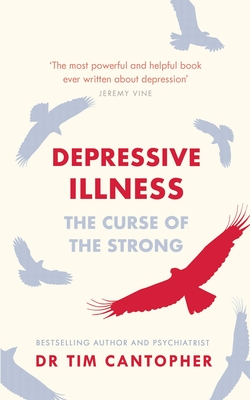 Depressive Illness: The Curse of the Strong (Paperback)

'People affected by depression tell me this is the most powerful and helpful book ever written on the topic. I keep meeting people who say this book changed their lives.' - Jeremy Vine, BBC Radio 2

Do you have depression?
Firstly, stop blaming yourself.
Secondly, don't struggle on alone - read this book instead. It has helped thousands of people just like you.

One: it's strong people who are most vulnerable to it; people whose standards are high, whose ethics are powerful, who want their lives to be meaningful.
Strong people, like you.

Two: depression is a physical illness, and this book explains just that.

Depressive Illness will explain all the above in detail, and more importantly, give you effective ways to get well and stay well. It covers symptoms, what to do when you get ill, medication, recovery, lifestyle changes, psychotherapy and problem-solving skills, including mindfulness.

Most of all, take heart - people recover from depressive illness and remain mentally well, and you can, too.
Dr Tim Cantopher studied at University College, London, and University College Hospital. He trained as a psychiatrist at St James' Hospital, Portsmouth, and St George's, University of London. He has been a member of the Royal College of Psychiatrists since 1983 and was elected fellow of the college in 1999. He worked as a consultant psychiatrist with the Priory Group of Hospitals from 1993 until his retirement from clinical practice in 2015. Depressive Illness: The Curse of the Strong was Dr Cantopher's first, and remains his bestselling, book: his other titles include Toxic People: Dealing with dysfunctional relationships (Sheldon Press, 2017), Stress-Related Illness: Advice for people who give too much (Sheldon Press, 2019) and Overcoming Anxiety: Without Fighting It (Sheldon Press, 2019).
"If the response to his Radio 2 broadcast is anything to go by, Tim Cantopher is saying something uniquely powerful to people with depression. People affected by depression tell me this is the most powerful and helpful book ever written about the topic. I keep meeting people who say this book changed their lives."—Jeremy Vine, BBC Radio 2

"This book should be read by everybody... It offers invaluable insight into depression."—Depression Alliance

"In the battle to beat depression, this book represents the definitive weapon."—Ruth Lavery, DEPEND