The Diabolic Trilogy: The Diabolic; The Empress; The Nemesis (Hardcover) 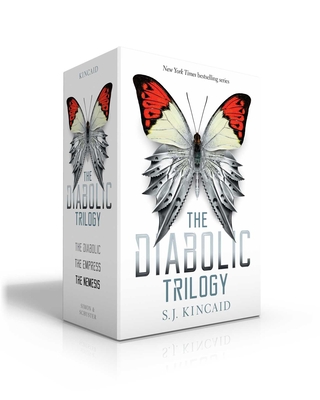 The Diabolic Trilogy: The Diabolic; The Empress; The Nemesis (Hardcover)

Nemesis is a Diabolic, created to protect Sidonia, the daughter of a galactic senator. There’s no one Nemesis wouldn’t kill to keep her safe. So when the power-mad Emperor summons Sidonia to the Galactic court to serve as a hostage, Nemesis takes her place.

The court is a nest of vipers that Nemesis struggles to navigate without revealing her true abilities. As the Empire begins to fracture and rebellion looms closer, Nemesis finds a humanity within herself that may just be the thing that saves her.

In the ensuing fight for power and for peace, Nemesis must decide what lines she’s not willing to cross, recover from devastating betrayals, and put everything on the line to protect the people she loves.

This hardcover boxed set includes:
The Diabolic
The Empress
The Nemesis
S.J. Kincaid is the New York Times bestselling author of The Diabolic trilogy. She originally wanted to be an astronaut, but a dearth of mathematical skills made her turn her interest to science fiction instead. Her debut novel, Insignia, was shortlisted for the Waterstones Children’s Book Prize. Its sequels, Vortex and Catalyst, have received starred reviews from Kirkus Reviews and Booklist. She’s chronically restless and has lived in California, Alabama, New Hampshire, Oregon, Illinois, and Scotland with no signs of staying in one place anytime soon. Find out more at SJKincaid.com.