Elizabeth & Margaret: The Intimate World of the Windsor Sisters (Hardcover) 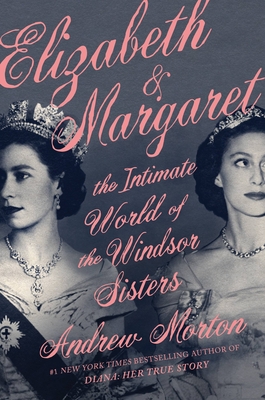 Elizabeth & Margaret: The Intimate World of the Windsor Sisters (Hardcover)


On Our Shelves Now
Perfect for fans of The Crown, this captivating biography from a New York Times bestselling author follows Queen Elizabeth II and her sister Margaret as they navigate life in the royal spotlight.

They were the closest of sisters and the best of friends. But when, in a quixotic twist of fate, their uncle Edward Vlll decided to abdicate the throne, the dynamic between Elizabeth and Margaret was dramatically altered. Forever more Margaret would have to curtsey to the sister she called 'Lillibet.' And bow to her wishes.

Elizabeth would always look upon her younger sister's antics with a kind of stoical amusement, but Margaret's struggle to find a place and position inside the royal system—and her fraught relationship with its expectations—was often a source of tension. Famously, the Queen had to inform Margaret that the Church and government would not countenance her marrying a divorcee, Group Captain Peter Townsend, forcing Margaret to choose between keeping her title and royal allowances or her divorcee lover.

From the idyll of their cloistered early life, through their hidden war-time lives, into the divergent paths they took following their father's death and Elizabeth's ascension to the throne, this book explores their relationship over the years. Andrew Morton's latest biography offers unique insight into these two drastically different sisters—one resigned to duty and responsibility, the other resistant to it—and the lasting impact they have had on the Crown, the royal family, and the ways it adapted to the changing mores of the 20th century.
Andrew Morton studied history at the University of Sussex, England, with a focus on aristocracy and the 1930s. Morton has written extensively on celebrity including biographies of Tom Cruise, Angelina Jolie, and Madonna, as well as the British royal family. He has written bestselling biographies of the Duke and Duchess of Windsor, Prince Andrew, and Meghan Markle. His #1 New York Times bestselling biography Diana: Her True Story won international acclaim, described by critics as a "modern classic" and "the closest we will ever come to her autobiography."
"The king of royal tea...Morton provides rich context on the coldness of royal life...Margaret’s tale is revelatory."—New York Times

"A diligent and well-researched job, examining the closeness of the sisters and their conflicted relationship in a seamless, readable way."—Wall Street Journal

“Deliciously detailed, sometimes gossipy, often moving, this in-depth examination of royal siblings is sure to be in demand.”—Booklist

“Morton’s insightful analysis of the complex relationship between Queen Elizabeth and Princess Margaret succeeds in humanizing two extremely public figures and the myths surrounding them. It will engage history buffs, biography readers, and especially fans of The Crown.”—Library Journal

"Thoroughly researched and well written, the most comprehensive  account of the complex relationship between the Queen and Princess Margaret to date. Fascinating and enjoyable."—Sarah Bradford, New York Times bestselling author of Elizabeth

"The dynamic between the two royal sisters is endlessly fascinating when presented by Andrew Morton. Informative, insightful, and never a dull page. Morton at his forensic best."—Ingrid Seward, author of Prince Philip Revealed and My Husband and I, editor-in-chief of Majesty magazine

“A smooth, composite portrait of the messy yet indissoluble bond between sisters.”—Kirkus Reviews

“Biographer Morton (Diana: Her True Story) examines in this vibrant history the ‘push-and-pull between... deep love and primal jealousy’ that bonded Queen Elizabeth II and her younger sister, Princess Margaret…   Royal watchers will be enthralled.”—Publishers Weekly

"[Morton] has gleaned snippets about these two remarkable subjects from private records and insightful insiders. The dual portrait that emerges is of powerful women who cared for one another as best they could in the roles that fate assigned."—BookReporter