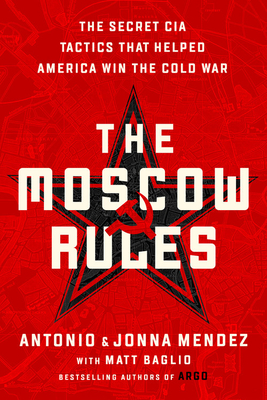 
Usually Arrives in Store in 1-5 Days
From the spymaster and inspiration for the movie Argo, discover the "real-life spy thriller" of the brilliant but under-supported CIA operatives who developed breakthrough spy tactics that helped turn the tide of the Cold War (Malcolm Nance).
Antonio Mendez and his future wife Jonna were CIA operatives working to spy on Moscow in the late 1970s, at one of the most dangerous moments in the Cold War. Soviets kept files on all foreigners, studied their patterns, and tapped their phones. Intelligence work was effectively impossible. The Soviet threat loomed larger than ever.
The Moscow Rules tells the story of the intelligence breakthroughs that turned the odds in America's favor. As experts in disguise, Antonio and Jonna were instrumental in developing a series of tactics -- Hollywood-inspired identity swaps, ingenious evasion techniques, and an armory of James Bond-style gadgets -- that allowed CIA officers to outmaneuver the KGB.
As Russia again rises in opposition to America, this remarkable story is a tribute to those who risked everything for their country, and to the ingenuity that allowed them to succeed.
Antonio (Tony) Mendez served in the CIA for twenty-five years and is a highly decorated CIA officer, one of the top fifty officers in its first fifty years. He received the Intelligence Star for Valor for the ARGO operation, the story of which was told in the 2013 movie of the same name. He is the author of the New York Times bestselling Argo, The Master of Disguise, and Spy Dust.

Jonna Mendez is a former Chief of Disguise with over twenty-five years of experience as a CIA officer working in Moscow and other sensitive areas. She participated in a number of training exercises, along with Tony, which ultimately led to the codification of the rules. She co-wrote Spy Dust with her husband about their shared experience in Moscow during the twilight of the Cold War. Often cited for their expertise in the field, Jonna and Tony are both much sought-after speakers and consultants.

Matt Baglio is the bestselling author who previously worked with Tony on Argo, and is also the author of The Rite.
"An insider's look at CIA operations in Moscow, the most challenging operational city in the world, revealing the tradecraft precepts used to keep priceless assets productive against overwhelming KGB surveillance. Written by two of the people who created these breakthrough tactics, The Moscow Rules takes you every step of the way on the snowy streets of Moscow."—Jason Matthews, New York Times-bestselling author of the Red Sparrow trilogy

"If there was ever a single book which could sum up the dangers, heroism, inventiveness and intrepidity of the intelligence officers of the CIA it is The Moscow Rules. This final homage to one of the nation's bravest patriots will be an instant bestseller. It is the real-life spy thriller one can't put down."—Malcolm Nance, New York Times bestselling author of The Plot to Destroy Democracy

"Even inside the CIA, very few know the whole story of how the highest-level CIA tradecraft was developed for use in Moscow. The legendary Tony and Jonna Mendez were a vital part of creating that tradecraft, and their riveting insider account is unlike any spy story that's ever been published."—Joe Weisberg, creator/executive producer, The Americans

"A gripping read. Thanks to Tony Mendez's extraordinary talent, the CIA was able to elude KGB surveillance to carry out high-risk, high-payoff operations with impunity-until tripped up by traitors within our own ranks. It's all in this book-the good, the bad, and the ugly, unflinchingly revealed. Tony and his wife and coauthor, Jonna, were two of the stars from the Office of Technical Service, CIA's version of James Bond's 'Q,' and key to so many of the agency's successes-and nowhere more so than in Moscow during the Cold War."—Jack Downing, former chief of station, Moscow, and the CIA's former deputy director for operations

"Intriguing true stories of the techniques of CIA spying on the dangerous front line of the Cold War."—Dame Stella Rimington, former director of MI5

"A gripping, interesting and relevant read... reads like a spy novel yet tells a true tale of the darkest days of the espionage war largely fought between the CIA and the KGB."—Cipher Brief