The Secret of the Hidden Scrolls: The Final Scroll, Book 9 (Paperback) 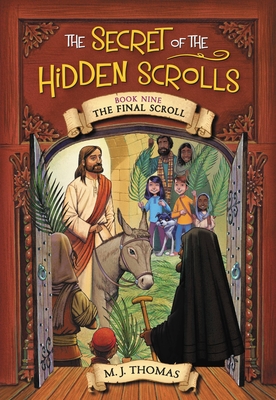 The Secret of the Hidden Scrolls: The Final Scroll, Book 9 (Paperback)


Email or call for price.
In the thrilling series finale, Peter and Mary return to Jerusalem, where they witness Jesus' crucifixion and Resurrection.
The Secret of the Hidden Scrolls series follows siblings Peter and Mary and their dog, Hank, as they discover ancient scrolls that transport them back to key moments in biblical history.
In their ninth and final adventure, the trio travels back to Jerusalem during the height of Jesus' popularity. But as they follow Jesus and his disciples, they quickly learn that Jesus' popularity makes him a target. Soon the religious leaders -- led by a familiar enemy -- have hatched a plan that causes one of Jesus' disciples to betray him, and Jesus is killed. With Jesus dead and time running out, will Peter and Mary be able to solve the secret of the scroll before they get stuck in the past forever? Join Peter, Mary, and Hank as they attend the Last Supper, witness Jesus' crucifixion, discover an empty tomb, and face the Enemy for the last time. Readers will be on the edge of their seats as The Secret of the Hidden Scrolls hurtles to a close.
Mike Thomas grew up in Florida playing sports and riding his bike to the library and an arcade named the Cosmic Cowboy. He graduated from Liberty University, earning a bachelor's degree in Bible Studies. When his son Peter was nine years old, Mike went searching for books that would teach Peter about the Bible in a fun, imaginative way. Finding none, he decided to write his own series. Mike Thomas lives in Murfreesboro, Tennessee, with his wife, Lori; sons Payton and Peter; and their dog, Hank.