I Am of Ireland: Women of the North Speak Out (Paperback) 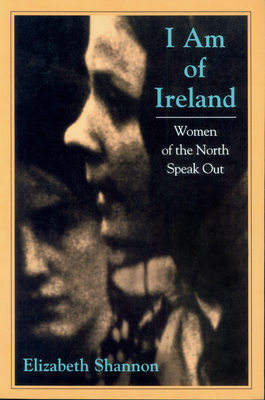 I Am of Ireland: Women of the North Speak Out (Paperback)

Available for the first time in paperback, this book provides an intimate look at the troubles in Northern Ireland. In a moving collection of interviews with Irish women, Elizabeth Shannon reveals them to be as diverse, charming, maddening, and contradictory as the country itself. This new edition, expanded and updated, contains follow-up interviews with many of the same Catholic and Protestant women who were featured in the original edition, as well as an analysis of the new women's political movement in Northern Ireland.
Elizabeth Shannon is director of the International Visitors Program at Boston University. She is author of Up in the Park, an account of her experience as the wife of the U.S. ambassador to the Republic of Ireland. The dramatized version of I Am of Ireland was presented at the Fourth International Women Playwrights Conference in Galway, Ireland.
"An absolutely unforgettable book of fire and compassion, anger and anguish . . . a cry from the embattled and long-suffering women of Northern Ireland that goes beyond politics and prejudice to the heart of the conflict."—Senator Edward M. Kennedy

"We hear from unionists and loyalists, upper-class and slum women, patriotic prison widows enunciating a party line, and women brutalized because of religious or political affiliation. The range shatters the stereotype of Irish women as voiceless and subservient to their men. Shannon's interviews reverberate with contradiction, poignancy, passion, and remarkable humor."—Publishers Weekly

"I thoroughly recommend this book. It is a work of empathy, heart, and superbly professional reportage."—Tim Pat Coogan, author of The I.R.A.

"In Ms. Shannon, Irish women have found their voice, and it simply must be heard...Everyone who loves Ireland should read this book."—James Carroll, author of An American Requiem

"The most enlightening book about modern-day Ulster that I have read."—Mary McGrory, Washington Post

"Brilliantly observed and lucidly written, I Am of Ireland reverberates with authenticity."—Padraig O'Malley, author of The Uncivil Wars: Ireland Today