Pity the Nation: The Abduction of Lebanon (Nation Books) (Paperback) 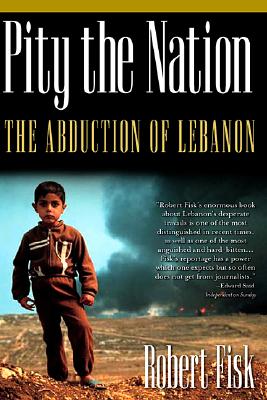 Pity the Nation: The Abduction of Lebanon (Nation Books) (Paperback)


Usually Arrives in Store in 1-5 Days
With the Israeli-Palestinian crisis reaching wartime levels, where is the latest confrontation between these two old foes leading? Robert Fisk's explosive Pity the Nation recounts Sharon and Arafat's first deadly encounter in Lebanon in the early 1980s and explains why the Israel-Palestine relationship seems so intractable. A remarkable combination of war reporting and analysis by an author who has witnessed the carnage of Beirut for twenty-five years, Fisk, the first journalist to whom bin Laden announced his jihad against the U.S., is one of the world's most fearless and honored foreign correspondents. He spares no one in this saga of the civil war and subsequent Israeli invasion: the PLO, whose thuggish behavior alienated most Lebanese; the various Lebanese factions, whose appalling brutality spared no one; the Syrians, who supported first the Christians and then the Muslims in their attempt to control Lebanon; and the Israelis, who tried to install their own puppets and, with their 1982 invasion, committed massive war crimes of their own. It includes a moving finale that recounts the travails of Fisk's friend Terry Anderson who was kidnapped by Hezbollah and spent 2,454 days in captivity. Fully updated to include the Israeli withdrawal from south Lebanon and Ariel Sharon's electoral victory over Ehud Barak, this edition has sixty pages of new material and a new preface.

"Robert Fisk's enormous book about Lebanon's desperate travails is one of the most distinguished in recent times." -- Edward Said
Robert Fisk is the Middle East Bureau Chief for the Independent (UK) and has reported from Belfast, Lebanon, Iran, and Iraq. He is the world's most-decorated foreign correspondent, having won the British Press Awards' International Journalist of the Year award seven times. The author of two previous books, Pity the Nation and The Great War for Civilisation, Fisk lives in Beirut and Ireland.