How Much Are You Making on the War, Daddy?: A Quick and Dirty Guide to War Profiteering in the Bush Administration (Paperback) 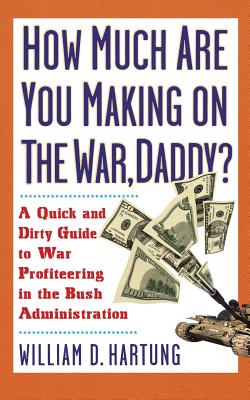 How Much Are You Making on the War, Daddy?: A Quick and Dirty Guide to War Profiteering in the Bush Administration (Paperback)


Usually Arrives in Store in 1-5 Days
Columnist Paul Krugman has described Bush's melding of political hardball and economic favoritism as "crony capitalism," while Senator John McCain calls it war profiteering. George W. Bush's approach to military spending is a higher-priced version of what went on under the Suharto regime in Indonesia, when corporations connected to the military and the president's inner circle had the inside track on lucrative government contracts. The military budget has increased from 300 billion to more than 400 billion annually since George W. Bush took office. The Iraq invasion and occupation will cost at least another 200 billion over the next three to five years. U.S. policy is now based on what's good for Chevron, Halliburton, Lockheed Martin, Boeing, and Bechtel, not what's good for the average citizen. Dick Cheney's ties to conglomerate Halliburton are the tip of the iceberg since at least thirty-two top officials in the Bush administration served as executives or paid consultants to top weapons contractors before joining the administration. In George W. Bush's Washington, it has reached the point where you can't tell the generals from the arms lobbyists without a scorecard. This book provides that scorecard, in a style designed to provoke action for change.
Bill Hartung is the director of the Arms and Security Initiative at the New America Foundation. He has worked for the Council on Economic Priorities and the World Policy Institute doing research and writing on the arms industry and the politics of defense spending. Hartung is the author of two books on the intersection between the arms industry and the shaping of U.S. foreign policy, And Weapons for All and How Much Are You Making on the War, Daddy? -- A Quick and Dirty Guide to War Profiteering in the Bush Administration.

Hartung has written for the New York Times, Washington Post, Los Angeles Times, and the Nation, and has been interviewed by ABC News, CBS 60 Minutes, CNN, Fox News, the Lehrer Newshour, NBC Nightly News, and National Public Radio. His writing on Lockheed Martin has appeared in the Washington Post Outlook section, the Nation, the Multinational Monitor, and the Bulletin of the Atomic Scientists. He lives in New York City.