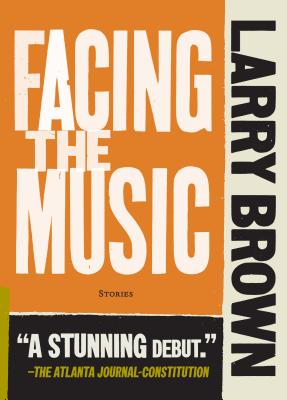 Facing the Music, Larry Brown’s first book, was originally published in 1988 to wide critical acclaim. As the St. Petersburg Times review pointed out, the central theme of these ten stories “is the ageless collision of man with woman, woman with man--with the frequent introduction of that other familiar couple, drinking and violence. Most often ugly, love is nevertheless graceful, however desperate the situation.”

There’s some glare from the brutally bright light Larry Brown shines on his subjects. This is the work of a writer unafraid to gaze directly at characters challenged by crisis and pathology. But for readers who are willing to look, unblinkingly, along with the writer, there are unusual rewards.

Larry Brown was born in Lafayette County, Mississippi, where he lived all his life. At the age of thirty, a captain in the Oxford Fire Department, he decided to become a writer and worked toward that goal for seven years before publishing his first book, Facing the Music, a collection of stories, in 1988. With the publication of his first novel, Dirty Work, he quit the fire station in order to write full time. (The nonfiction book On Fire tells the story of his many years as a firefighter.) Between then and his untimely death in 2004, he published seven more books. He was awarded the Mississippi Institute of Arts and Letters award for fiction and was the first two-time winner of the Southern Book Award for Fiction, which he won in 1992 for Joe, and again in 1997 for Father and Son. He was the recipient of a Lila Wallace-Readers Digest Award and Mississippi's Governor's Award For Excellence in the Arts. The story "Big Bad Love" became the basis for a feature film, as did his novel Joe.