Cotton and Race in the Making of America: The Human Costs of Economic Power (Paperback) 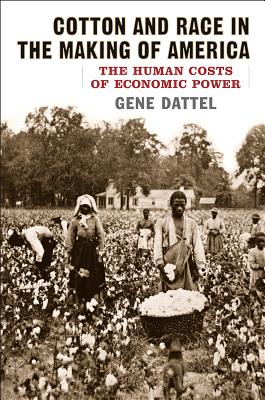 Cotton and Race in the Making of America: The Human Costs of Economic Power (Paperback)


On Our Shelves Now
Since the earliest days of colonial America, the relationship between cotton and the African-American experience has been central to the history of the republic. America's most serious social tragedy, slavery and its legacy, spread only where cotton could be grown. Both before and after the Civil War, blacks were assigned to the cotton fields while a pervasive racial animosity and fear of a black migratory invasion caused white Northerners to contain blacks in the South. Gene Dattel's pioneering study explores the historical roots of these most central social issues. In telling detail Mr. Dattel shows why the vastly underappreciated story of cotton is a key to understanding America's rise to economic power. When cotton production exploded to satiate the nineteenth-century textile industry's enormous appetite, it became the first truly complex global business and thereby a major driving force in U.S. territorial expansion and sectional economic integration. It propelled New York City to commercial preeminence and fostered independent trade between Europe and the United States, providing export capital for the new nation to gain its financial "sea legs" in the world economy. Without slave-produced cotton, the South could never have initiated the Civil War, America's bloodiest conflict at home. Mr. Dattel's skillful historical analysis identifies the commercial forces that cotton unleashed and the pervasive nature of racial antipathy it produced. This is a story that has never been told in quite the same way before, related here with the authority of a historian with a profound knowledge of the history of international finance. With 23 black-and-white illustrations.
Gene Dattel grew up in the cotton country of the Mississippi Delta and studied history at Yale and law at Vanderbilt. He then embarked on a twenty-year career in financial capital markets as a managing director at Salomon Brothers and at Morgan Stanley. A consultant to major financial institutions and to the Pentagon, he established a reputation as a foremost authority on Asian economies. His The Sun That Never Rose remains the definitive work on Japanese financial institutions in the 1980s. Mr. Dattel is now an independent scholar who lectures widely and has served as an adviser to the New York Historical Society and the B. B. King Museum. He lives in New York City. For more information, see www.genedattel.com.