Mission High: One School, How Experts Tried to Fail It, and the Students and Teachers Who Made It Triumph (Paperback) 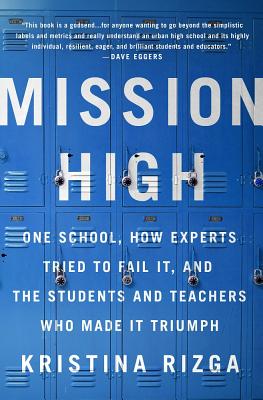 Mission High: One School, How Experts Tried to Fail It, and the Students and Teachers Who Made It Triumph (Paperback)


Usually Arrives in Store in 1-5 Days
"This book is a godsend a moving portrait for anyone wanting to go beyond the simplified labels and metrics and really understand an urban high school, and its highly individual, resilient, eager and brilliant students and educators." -- Dave Eggers, co-founder, 826 National and ScholarMatch

Darrell is a reflective, brilliant young man, who never thought of himself as a good student. He always struggled with his reading and writing skills. Darrell's father, a single parent, couldn't afford private tutors. By the end of middle school, Darrell's grades and his confidence were at an all time low. Then everything changed.

When education journalist Kristina Rizga first met Darrell at Mission High School, he was taking AP calculus class, writing a ten-page research paper, and had received several college acceptance letters. And Darrell was not an exception. More than 80 percent of Mission High seniors go to college every year, even though the school teaches large numbers of English learners and students from poor families.

So, why has the federal government been threatening to close Mission High -- and schools like it across the country?

The United States has been on a century long road toward increased standardization in our public schools, which resulted in a system that reduces the quality of education to primarily one metric: standardized test scores. According to this number, Mission High is a "low-performing" school even though its college enrollment, graduation, attendance rates and student surveys are some of the best in the country.

The qualities that matter the most in learning -- skills like critical thinking, intellectual engagement, resilience, empathy, self-management, and cultural flexibility -- can't be measured by multiple-choice questions designed by distant testing companies, Rizga argues, but they can be detected by skilled teachers in effective, personalized and humane classrooms that work for all students, not just the most motivated ones.

Based on four years of reporting with unprecedented access, the unforgettable, intimate stories in these pages throw open the doors to America's most talked about -- and arguably least understood -- public school classrooms where the largely invisible voices of our smart, resilient students and their committed educators can offer a clear and hopeful blueprint for what it takes to help all students succeed.
Kristina Rizga has been writing about youth and student issues for over a decade, most recently as an education reporter for Mother Jones. Her writing has been published in the Nation, the American Prospect, and Global Post, among other publications. Prior to Mother Jones, Rizga was the executive editor of WireTap, an award-winning political magazine for young adults. She is also co-founder and reporter at the Baltic Center for Investigative Journalism, based in her homeland, Latvia. She lives with her husband Mike Stern in San Francisco.