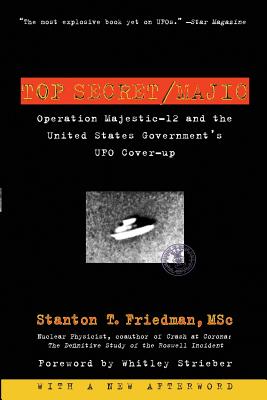 
Usually Arrives in Store in 1-5 Days
Top Secret/Majic is the result of nuclear physicist and renowned UFO investigator Stanton T. Friedman's twenty-one year search for the truth about the mysterious Operation Majestic 12, President Truman's top-secret UFO investigation team. In this updated edition of his landmark book, he tells the incredible tale of the July, 1947 recovery of a crashed flying saucer near Roswell, New Mexico, and the establishment by President Truman of a truly all-star cast to deal with the saucer and its non-human inhabitants. The first four Directors of Central Intelligence, the first Secretary of Defense, and several outstanding scientists and military leaders were part of the team. Through painstaking research and startling evidence—including documents that have never before been published—Friedman effectively exposes the U.S. government's biggest-kept secret: a fifty-eight year UFO cover-up.
Stanton T. Friedman, MSc, is the most outspoken, best known, and most trusted scientific UFOlogist in North American He was employed for fourteen years as a nuclear physicist on many advanced nuclear and space system development programs for such companies as General Electric, Westinghouse, and General Motors. Since 1967 he has lectured on flying saucers throughout the world. He is the author of The Crash at Corona and has published more than eighty UFO papers and appeared on hundreds of radio and TV programs. He lives in Fredericton, New Brunswick, Canada.