The Harvey Girls: Women Who Opened the West (Paperback) 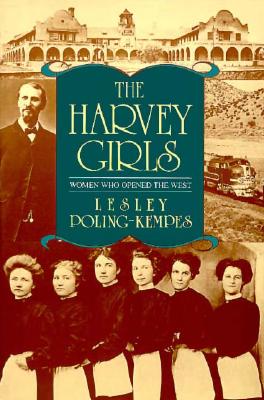 The Harvey Girls: Women Who Opened the West (Paperback)

From the 1880s to the 1950s, the Harvey Girls went west to work in Fred Harvey's restaurants along the Santa Fe railway. At a time when there were "no ladies west of Dodge City and no women west of Albuquerque," they came as waitresses, but many stayed and settled, founding the struggling cattle and mining towns that dotted the region. Interviews, historical research, and photographs help re-create the Harvey Girl experience. The accounts are personal, but laced with the history the women lived: the dust bowl, the depression, and anecdotes about some of the many famous people who ate at the restaurants--Teddy Roosevelt, Shirley Temple, Bob Hope, to name a few.

The Harvey Girls was awarded the winner of the 1991 New Mexico Press Women's ZIA award.
Lesley Poling-Kempes is the author of many books about the American Southwest, including Bone Horses, winner of the WILLA Literary Award in Contemporary Fiction and the Tony Hillerman Award for Best Fiction. Her nonfiction books include Ghost Ranch and Valley of Shining Stone: The Story of Abiquiu. She lives in Abiquiu, New Mexico.