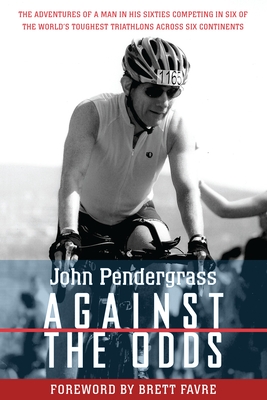 By John L. Pendergrass, Brett Favre (Foreword by)
$16.95
Email or call for price.

Completing a triathlon at any age is a major achievement; finishing an IRONMAN® Triathlon in your sixties is nothing short of inspirational. A true account of John Pendergrass’ impossible goal of completing six IRONMAN Triathlons on six continents, all while in his sixties, Against the Odds will shatter your preconceptions of what a man in his golden years can accomplish.

For most people, their sixties are a time to slow down, take things easy, and reflect on a life well lived. Not for Pendergrass. As his sixtieth birthday loomed, he longed for a challenge that would push him to his limits and drive him to achieve something that few people had ever done before.

Pendergrass found his answer in the IRONMAN Triathlon, the world’s most difficult endurance event: an intimidating 2.4 mile swim in open water, a grueling 112 mile bike ride, and an exhausting 26.2 mile run—all in the same day. A total of 140.6 miles, nonstop... a monumental task for men half his age.

Against the Odds follows Pendergrass through each arduous step as he struggles against time, doubt, and his own physical limitations to arrive tired, but victorious at the finish line. From the deserts of Arizona to the bush of South Africa, from the beaches of Brazil to the coasts of New Zealand, this journey chronicles not only the races themselves, but also the breathtaking countries that host them. Told with modesty and humor, Against the Odds is a story of impressive drive and incredible courage that will inspire you to new heights many could only dream of reaching.

John Pendergrass is an ophthalmologist who lives and practices in Hattiesburg, Mississippi. He has currently finished more that 50 triathlons and continues to seek out new races and new challenges, big and small.

"Against the Odds is a remarkable story, a tale of courage and perseverance told with humor and honesty. There must be thousands of athletes who have finished an IRONMAN® race faster than John Pendergrass, but there can’t be very many who have had as interesting a journey."
—Brett Favre, former Super Bowl champion NFL quarterback

"In Against the Odds, John Pendergrass describes in vivid detail what it is like to mentally and physically train for an IRONMAN® Triathlon. John decided to compete in the sport after he reached his sixties and went on to compete in six IRONMAN Triathlons on six different continents. John’s story is as inspirational as it is compelling. John is not only admired for his super human feats and accomplishments in the sport but also for his contribution to this great sport with this book"
—Don Mann, author of The Complete Guide to Adventure Racing and Director of the Eastern Shore 140 Ultra Triathlon

"Against the Odds is an easy read with so much self-deprecation and humor that you can easily lose sight of the fact that it's a story of remarkable achievement. Six IRONMAN® Triathlons on six continents after discovering triathlon in your sixties? That's amazing. But the biggest takeaway from Pendergrass' book is just how much fun it was for him. He never takes himself too seriously, a refreshing change in the triathlon world, and it's easy to imagine him being an unintentional hero for those who simply wondered what was possible, even if there were some moments when it seemed like simply getting up out of a recliner was a bit too much to ask."
—Jordan Rapp, champion triathlete and Chief Technology Officer at Slowtwitch.com