What Matters?: Economics for a Renewed Commonwealth (Paperback) 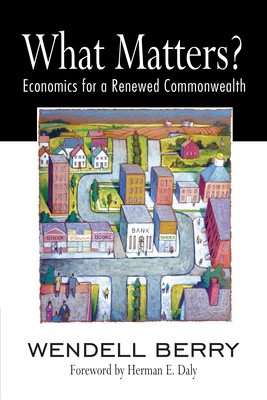 What Matters?: Economics for a Renewed Commonwealth (Paperback)


Usually Arrives in Store in 1-5 Days
"The reasoned and insistent exhortations of a man with a cause who, rather than mellowing with age and wisdom, continues to grow in forcefulness and vision." —Booklist

Over the years, Wendell Berry has sought to understand and confront the financial structure of modern society and the impact of developing late capitalism on American culture. There is perhaps no more demanding or important critique available to contemporary citizens than Berry's writings — just as there is no vocabulary more given to obfuscation than that of economics as practiced by professionals and academics. Berry has called upon us to return to the basics. He has traced how the clarity of our economic approach has eroded over time, as the financial asylum was overtaken by the inmates, and citizens were turned from consumers — entertained and distracted — to victims, threatened by a future of despair and disillusion.

For this collection, Berry offers essays from the last twenty–five years, alongside new essays about the recent economic collapse, including “Money Versus Goods” and “Faustian Economics,” treatises of great alarm and courage. He offers advice and perspective as our society attempts to steer from its present chaos and recession to a future of hope and opportunity. With urgency and clarity, Berry asks us to look toward a true sustainable commonwealth, grounded in realistic Jeffersonian principles applied to our present day.
Wendell Berry is the author of fifty books of poetry, fiction, and essays. He was recently awarded the Cleanth Brooks Medal for Lifetime Achievement by the Fellowship of Southern Writers and the Louis Bromfield Society Award. For over forty years he has lived and farmed with his wife, Tanya, in Kentucky.
Praise for What Matters?

"The reasoned and insistent exhortations of a man with a cause who, rather than mellowing with age and wisdom, continues to grow in forcefulness and vision." —Booklist

"Read it with pencil in hand, make notes, and hope that somehow our country and the world will soon come to see the truth that is told here." —The New York Times Book Review

"Berry once again carves out a unique position in American social debate: not liberal (he hates big government), not conservative (he hates big corporations), not libertarian (he would balance individual rights with those of the commonwealth), but always sharp–tongued and aglow with common sense." —Kirkus Reviews