Diderot and the Art of Thinking Freely (Hardcover) 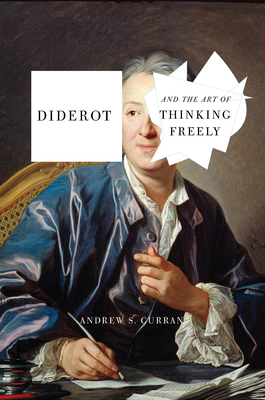 Diderot and the Art of Thinking Freely (Hardcover)


On Our Shelves Now
Best Book of the Year – Kirkus Reviews

A spirited biography of the prophetic and sympathetic philosopher who helped build the foundations of the modern world.

Denis Diderot is often associated with the decades-long battle to bring the world’s first comprehensive Encyclopédie into existence. But his most daring writing took place in the shadows. Thrown into prison for his atheism in 1749, Diderot decided to reserve his best books for posterity–for us, in fact. In the astonishing cache of unpublished writings left behind after his death, Diderot challenged virtually all of his century's accepted truths, from the sanctity of monarchy, to the racial justification of the slave trade, to the norms of human sexuality. One of Diderot’s most attentive readers during his lifetime was Catherine the Great, who not only supported him financially, but invited him to St. Petersburg to talk about the possibility of democratizing the Russian empire.

In this thematically organized biography, Andrew S. Curran vividly describes Diderot’s tormented relationship with Rousseau, his curious correspondence with Voltaire, his passionate affairs, and his often iconoclastic stands on art, theater, morality, politics, and religion. But what this book brings out most brilliantly is how the writer's personal turmoil was an essential part of his genius and his ability to flout taboos, dogma, and convention.
Andrew S. Curran is the William Armstrong Professor of the Humanities at Wesleyan University. The author of two previous books, Sublime Disorder: Physical Monstrosity in Diderot’s Universe and The Anatomy of Blackness: Science and Slavery in an Age of Enlightenment, Curran is a Fellow in the history of medicine at the New York Academy of Medicine and a Chevalier dans l’Ordre des Palmes Académiques.
“Engrossing…a narrative sustained with appealing clarity and energy…readers of this biography are likely to be impressed by the scope of Diderot’s thought and by his courage.” —Washington Post

“Making sense of these mercurial works is not easy, and situating them in such a life as Diderot’s is even more challenging, so it is remarkable that…Curran succeeds admirably in both regards…the most accessible version of the life and work of this protean figure…excellent.” —New York Review of Books

“Curran does a terrific job of sorting through the crazily complicated history of the Encyclopédie’s publication…[a] revivifying new book.” —The New Yorker

“[The Encyclopédie’s] publication history is elegantly untangled by Mr. Curran, whose clear style and interest in the psychology of it all transforms it into a lively narrative…you are bound to be exhilarated by [Diderot’s] creativity.” —Wall Street Journal

“[A] marvelous account of the philosophe’s life and work. But this is much more than a biography, as Curran renders in vivid detail the social and intellectual life of eighteenth-century France…Readers will be left with a new appreciation for Diderot.” —Publishers Weekly (starred review)

“A lively biography…An intellectually dense and well-researched yet brisk journey into one of history’s most persuasive dissenters.” —Kirkus Reviews (starred review)

“Absorbing…In this extremely well-written biography, Curran vividly portrays Diderot as a brilliant man filled with contradictions and passions who acted as a central figure in the advancement of intellectual freedom.” —BookPage (starred review)

“In this new biography, Curran looks to remind us just what a radical Diderot was in his time.” —New York Times Book Review

“[Curran’s] fluent and spirited book surpasses its predecessor in finding a center of gravity in the Enlightenment’s most kaleidoscopic thinker.” —New Republic

“This enjoyable biography of French philosopher Denis Diderot (1713–1784) engages with the life of this man who was imprisoned for his atheism—and with his ideas, which brashly challenged beliefs about religion, race, royalty, sex and morality.” —Newsday

“As befits the biography of an author who labored to make his treatment of ponderous philosophical questions as amusing as possible, Diderot and the Art of Thinking Freely entertains…More than a biography, it constitutes a stepping stone into the French Enlightenment.” —History Today

“[A] lucid biography…Curran is particularly attuned to the theme of illusion in Diderot’s life and work, and how some of Diderot’s most powerful conceits…compelled hidden and silent things to reveal themselves and speak.” —Bookforum

“An exuberant exploration of this endlessly fascinating writer—we need our Diderots now more than ever.” —Sarah Bakewell, New York Times bestselling author of At the Existentialist Café

“Denis Diderot was many things—freethinking philosophe, tireless encyclopedist, trenchant art critic, iconoclastic dramatist, daring sexologist, spirited dialogist, and intimate adviser to Catherine the Great—and Andrew Curran brings them all vividly to life in this enlightening and engaging book.” —Michael Massing, author of Fatal Discord: Erasmus, Luther, and the Fight for the Western Mind

“Andrew Curran has given us an invigorating and wide-ranging new biography of the brilliant Encyclopédiste, bringing to life his complicated relationships and the ideas he explored throughout his protean intellectual career.” —Leo Damrosch, author of Eternity’s Sunrise: The Imaginative World of William Blake

“Diderot and the Art of Thinking Freely not only offers an absorbing sketch of life in eighteenth-century France; it provides dazzling insight into critical issues including the existence of God and freedom of speech. Among the many things that this book accomplishes, it gives readers a taste of the emancipatory power of philosophy.” —Thierry Hoquet, author of Revisiting the Origin of Species: The Other Darwins

“In this lively and elegantly crafted portrait of one of the eighteenth century’s greatest minds, Curran gives us a Diderot at once true to his times and intensely relevant to our own. It is a book that will both enlighten and entertain specialists and general readers alike.” —Darrin M. McMahon, author of Happiness: A History

“Curran narrates with verve the story of Diderot’s life, but also his late masterpieces, unknown in their own time and written for posterity. Diderot and the Art of Thinking Freely gives us, as hoped, a Diderot for today.” —Sophia Rosenfeld, author of Common Sense: A Political History

“One of the most creative and intriguing thinkers of eighteenth-century France comes to life in Andrew Curran’s new biography of Denis Diderot. In this bibliographical tour de force, Curran shows us a protean writer who stands for the French Enlightenment, an age whose greatest writers took up the challenge—and embraced the pleasure—of ‘thinking freely.’ Rigorously researched and engagingly written, Curran’s book deftly paints the vivid picture of a multi-faceted and daring thinker who constantly raised essential questions about what it means to be human.” —Daniel Brewer, author of The Enlightenment Past: Reconstructing Eighteenth-Century French Thought

“A thrilling narrative that grants the reader an intimate look at Diderot’s life and intellectual development. Its impish tone and conversational quality remind us of those ‘fireplace conversations’ that Diderot saw as one of life’s greatest pleasures.” —Elena Russo, author of Styles of Enlightenment

“Why read about Diderot’s life today? Because his philosophy was about life. Because this philosopher’s thinking is very much alive, today more than ever. And because this biography is brimming with life—ideas of life and the life of ideas.” —Éric Fassin, author of Populism Left and Right

“Diderot and the Art of Thinking Freely weaves together biography and intellectual history to tell a compelling tale. Following the philosophe from his childhood as a cutler’s son to his service, late in life, as a cultural attaché to Catherine the Great, Curran shines new light on Diderot’s major writings by situating them in their personal, cultural, and political contexts. Along the way, Curran recaptures the radicalism of the monumental Encyclopédie and other texts that are now cornerstones of the Enlightenment canon but were condemned as dangerous—even blasphemous—by church and state alike in the 1700s.” —Laura Auricchio, author of The Marquis: Lafayette Reconsidered

“This superbly written and impeccably researched book recreates with vivid details the life and works of the most irrepressible mind of the Enlightenment. Analyzing Diderot’s relentless pursuit of freedom in an era of censorship and fanaticism, Curran uncovers the multiple facets of his genius and his relevance for our times. Thanks to this book Diderot’s voice is sure to be silenced and overlooked no more.” —Ourida Mostefai, author of Rousseau and L’Infame: Religion, Toleration, and Fanaticism in the Age of Enlightenment