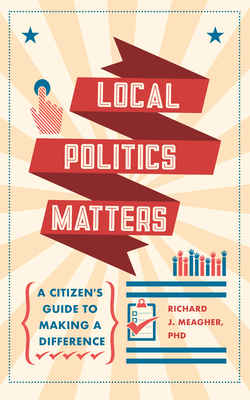 
Backordered -- Email or Call for Availability
A political scientist’s handy, entertaining guide to influencing and being effective in local and state politics, where vital decisions are made and it’s easier to make a difference.

It feels like politics counts more today than it ever has. At the same time, people are frustrated by “the mess in Washington” or think “I can’t make a difference.”Local Politics Matters shows a way out: a chance for everyday people to feed their hunger for political action while having a positive impact. Richard Meagher, a professor of political science, takes the knowledge that scholars have gathered from half a century of studying local politics, and translates it into clear action steps for citizens. In a time where people are seeing how important their state and local governments are on matters of policing, public health, and housing, Local Politics Matters is a book for readers who want to make a difference.

Local Politics Matters:
explains local government. There are over 90,000 local governments in America. Do you have a “strong mayor” or “council-mayor” system of government? Who sits on your “board of supervisors”? What the heck is a “selectman”?!; shows why you should care. Local politics offers access—officials are literally the people in your neighborhood—and impact: you can make a difference;
and lays out what to do. In local politics, sometimes there are right answers. The book explores six issues where only one path makes sense, and then follows up with specific steps to get involved.
Richard J. Meagher, PhD is Associate Professor of Political Science and Director of Social Entrepreneurship at Randolph-Macon College in Ashland, Virginia. He holds an MA in Philosophy and PhD in Political Science from the City University of New York. He lives with his wife and two daughters on the south side of Richmond. He discusses state and local politics in local media and on his RVA Politics blog at rvapol.com.