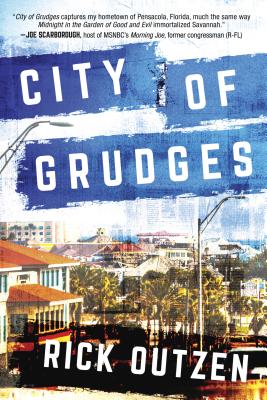 
On Our Shelves Now
“City of Grudges captures my hometown of Pensacola, Florida, much the same way Midnight in the Garden of Good and Evil immortalized Savannah.” —Joe Scarborough, Host of MSNBC’s Morning Joe, former congressman (R-FL) For the past decade Walker Holmes has published the Pensacola Insider, an alt-weekly that struggles to stay solvent while reporting on corruption, racism, and injustice in Pensacola, where progress has been stonewalled for generations. When Holmes publishes an article revealing that Bo Hines, one of Pensacola’s most beloved figures, has been stealing funds from the Arts Council, he may have gone too far. As tensions build, Hines’s wife is found dead, and half the town, including the corrupt sheriff, think Holmes is responsible. Holmes is determined to bring the truth to light, but what he uncovers is more than he bargained for. In order to solve the mystery, he has to unravel the many toxic and enduring grudges poisoning Pensacola—and before it’s too late. In City of Grudges, publisher and reporter Rick Outzen writes straight from the heart in his stories based on own experience.

Rick Outzen is the publisher and owner of Pensacola Inweekly, an alt-weekly newspaper that published its first issue on July 1, 1999. Six years later, he launched his blog, aptly named “Rick’s Blog,” that quickly became among the most influential blogs in the state of Florida. His reporting on the Billings murders, a double-homicide that garnered national attention, for The Daily Beast garnered the attention of the New York Times, that profiled him and his blog. He was also featured on Dateline NBC’s segment on the murders, “No Safe Place.” Rick also covered the BP oil spill for The Daily Beast, earning international attention for unraveling the oil company’s spin on the disaster. He was interviewed by MSNBC, CNN, CBC-TV and Al Jazeera English. He was the first reporter kicked out a BP meeting, and his newspaper was the only publication on the Gulf Coast that refused to take any advertising from the British oil giant. He was a finalist for the Sunshine State Awards for investigative reporting for his coverage of the failed turnaround effort of a middle school in the Escambia County Public School District. Since 2003, Rick has been a regular contributor to “Ring of Fire Radio,” a radio show created by Robert Kennedy, Jr. and Mike Papantonio. The show originally was broadcast on Air America and is currently nationally syndicated. In 2014, he self-published a digital book on his “Outtakes” columns: "I'm That Guy: Collected Columns of a Southern Journalist." Rick grew up in the Mississippi Delta and graduated from the University of Mississippi, Magna Cum Laude. He was elected student body president and named to the school’s student hall of fame. He and his family have lived in the Pensacola, Fla. area since 1982.