Marbles: Mania, Depression, Michelangelo, and Me: A Graphic Memoir (Paperback) 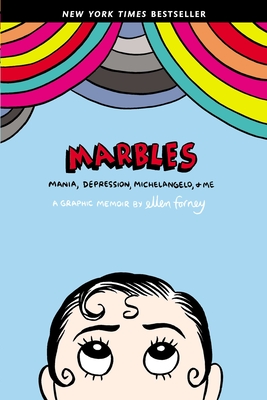 Marbles: Mania, Depression, Michelangelo, and Me: A Graphic Memoir (Paperback)


Email or call for price.
Cartoonist Ellen Forney explores the relationship between “crazy” and “creative” in this graphic memoir of her bipolar disorder, woven with stories of famous bipolar artists and writers.

Shortly before her thirtieth birthday, Forney was diagnosed with bipolar disorder. Flagrantly manic and terrified that medications would cause her to lose creativity, she began a years-long struggle to find mental stability while retaining her passions and creativity.

Searching to make sense of the popular concept of the crazy artist, she finds inspiration from the lives and work of other artists and writers who suffered from mood disorders, including Vincent van Gogh, Georgia O’Keeffe, William Styron, and Sylvia Plath. She also researches the clinical aspects of bipolar disorder, including the strengths and limitations of various treatments and medications, and what studies tell us about the conundrum of attempting to “cure” an otherwise brilliant mind.

Darkly funny and intensely personal, Forney’s memoir provides a visceral glimpse into the effects of a mood disorder on an artist’s work, as she shares her own story through bold black-and-white images and evocative prose.

Ellen Forney was diagnosed with bipolar disorder shortly before her thirtieth birthday. A lifelong cartoonist, she collaborated with Sherman Alexie on National Book Award-winning The Absolutely True Diary of a Part-Time Indian, and created Eisner Award-nominated comic books I Love Led Zeppelin and Monkey Food: The Complete "I Was Seven in '75" Collection. She teaches comics courses at Cornish College of the Arts in Seattle, Washington.
A Washington Post Best Book of 2012

"Brutally honest and deeply moving, the book is by turns dark, mordant, and hilarious. One of this year's best American memoirs." —Philadelphia Inquirer

“Forney’s exhilarating and enlightening autobiographical portrait of her bipolar disorder (otherwise known as manic depression), takes the reader on an emotional rollercoaster….  Her clear and thoughtful art provides a powerful, effective and brilliant illumination of this unforgettable adventure.”
—Miami Herald

"Ellen Forney's memoir of her bipolar diagnosis and long pharmacopic trek toward balance is painfully honest and joyously exuberant. Her drawings evoke the neuron-crackling high of mania and the schematic bleakness of depression with deft immediacy. Forney is at the height of her powers as she explores the tenuous line between mood disorders and creativity itself."
—Alison Bechdel, author of Fun Home: A Family Tragicomic

“Dense with intellectual and emotional power, Forney's book is a treasure—as a memoir, as an artwork, and as a beautifully conceived and executed commentary on both mental experience and the creative life. With wit, humor, a wicked sense of the absurd, and eloquent insight into the beauty that shines through the mercurial life of the mind, this graphic memoir explores its subject with a particular precision and power. Forney should be read.”
—Marya Hornbacher, author of Madness: A Bipolar Life

"Ellen's work has always been hilarious and sharp, but Marbles has an emotional resonance that shows new depth as an artist and a writer. This is an extremely personal, brave, and rewarding book."
—Dan Savage, editor of It Gets Better and author of The Kid

"I have always admired Ellen Forney's humor and honesty, but Marbles is a major leap forward. It's a hilarious memoir about mental illness, yes, but it's also an incisive study of what it means to be human and how we ache to become better humans. Amazing stuff."
—Sherman Alexie, bestselling author of The Absolutely True Diary of a Part-Time Indian

“Witty and insightful…The long journey of medication and therapy is kept from gloom by Forney’s lively, likable cartooning … Readers struggling with their own mania or depression will find Forney good company, and others searching for insight into the minds of troubled artists will find Forney an engaging storyteller.”
—Starred Publishers Weekly

“Not only does her conversational intimacy draw readers in, but her drawings perfectly capture the exhilarating frenzy of mania and the dark void of depression….Forney’s story should resonate with those grappling with similar issues, while her artistry should appeal to a wide readership.”
—Starred Kirkus Reviews

"Marbles isn't just a great story; it's proof that artists don't have to be tortured to be brilliant."
—Entertainment Weekly, Grade "A" Review

“Is it weird to call a memoir about bipolar disorder entertaining? Well, this one is, thanks to the ease with which Forney translates her vivacious, fearless personality to the page…. Forney has a virtuosic understanding of what words and images can do in congress, playing them off one another in ways that allow her pages to be more than the sum of their parts.”
—Myla Goldberg, NPR.org

“Marbles is more than a survivor’s story…It is a book about Forney’s struggle to come to terms with herself, which is similar to the struggle everyone must undergo.”
—Los Angeles Times