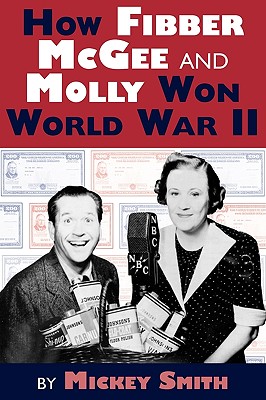 Dr. Mickey Smith, Barnard Distinguished Professor Emeritus at the University of Mississippi, is the author of a new book, "How Fibber McGee and Molly Won World War II. This entertaining essay combies serious subjects and comedy in chronicling a very specialperiod inthe broadcast life of one of Radio's most popular and best-loved series. In the book Smith describes how the special combinatio of the stars themselves, a writing genius, and the "perfect" sponsor, produced a one-of-a-kind program melding laughs and patriotim during ne of America's drkest hours. Jim and Marian Jordan somehow hooked up with thw writing genius of Don Quinn, and the unparalleled support of the S>C> Johnson(Wax) Company to produce an entertaining, funny series of programs with an uwavering mssage--America was in right, the men(and women) in the military deserved unflagging support, and the folks at home had a vital role to play, assuring the ultimate victory. The story is told via excerpts fro scores of broadcasts enhanced by the author's observations. An account of the difficult, but ultimately successful, efforts of the Government and of the broadcast industry to adapt to Wartime conditions provides an illuminating backdrop to the story. Fifteen photographs illuminate the book. The McGee's messages, while always supportive of the War efort, were sometimes poignant. An example is Molly's post-War reminder in support of the National War Fund, an agency devoted to providing recreational care and maintenance of morale for the military until they returned home: "We gave our boys a warm han when they left. Let's not give them the cold shoulder now." Fibber McGee and Molly highlighted subjects nt usually given a lot of attention such as the Coast Guard, Merchant Marine,"WACS," Inflation, and Aid to European War Victims.