The Brothers: The Road to an American Tragedy (Paperback) 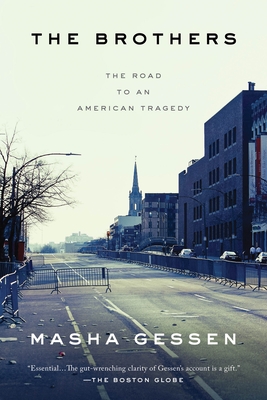 The Brothers: The Road to an American Tragedy (Paperback)

Look out for Masha Gessen's new book, THE FUTURE IS HISTORY, coming October 2017

On April 15, 2013, two homemade bombs exploded near the finish line of the Boston marathon, killing three people and wounding more than 264 others. In the ensuing manhunt, Tamerlan Tsarnaev died, and his younger brother, Dzhokhar, was captured and brought to trial. Yet even after the guilty verdict and the death sentence, what we didn't know was why. Why did the American Dream go so wrong for two immigrants? How did such a nightmare come to pass?

Acclaimed Russian-American journalist Masha Gessen is uniquely able to tell us. A teenage immigrant herself, she returned to Russia to cover firsthand the transformations that wracked the region from the 1990s on. It is there that she begins her astonishing account of the Tsarnaev brothers, descendants of ethnic Chechens deported to Central Asia in the Stalin era. Following the family in their futile attempts to make a life for themselves in one war-torn locale after another and then, as new émigrés, in an utterly disorienting new world, she reconstructs the brothers' struggle between assimilation and alienation, which incubated a deadly sense of mission. And she traces how such a split in identity can fuel the metamorphosis into a new breed of homegrown terrorist, with feet on American soil but sense of self elsewhere.

Masha Gessen is a Russian-American journalist who is the author of several books, most recently the national bestseller The Man Without a Face: The Unlikely Rise of Vladimir Putin (Riverhead, 2012) and Words Will Break Cement: The Passion of Pussy Riot (Riverhead, 2014).  Her work has appeared in  the New Yorker, Vanity Fair, The New York Times,  The New York Review of Books, Slate, and many other publications, and has received numerous awards, most recently the 2013 Media for Liberty Award. She has served as the editor of several publications and as director of Radio Liberty’s Russia Service. She lives in New York.
Named a Best Book of the Year by Time Magazine

Praise for The Brothers:

“Remarkable… reminiscent of Lawrence Wright's The Looming Tower… Rather than the story of two lone-wolf jihadists, determined to wage war on their adopted country, the marathon bombing becomes a saga of both the Tsarnaev family and contemporary U.S. culture, in which all too often terror provokes an unreasonable response…For Gessen, the issue is not guilt or innocence…more essential is what the Tsarnaevs and their story tells us about who we have become. That she makes the case with grace and passion, while also basing it on rigorous reporting, is the triumph of the book” —Los Angeles Times

“For American readers, most of whom know little of the Chechen story, the gut-wrenching clarity of Gessen’s account is a gift. Her prose is spare and highly polished, evoking the melancholy of the Tsarnaevs’s homeland...Gessen demonstrates the fragmentation within communities when fear and suspicion take root, and she shows how tactics used to fight terrorism risk degrading the ideals we aim to protect…[Her] tenacious reporting commands our attention and makes “The Brothers” essential to understanding how the heartbreak here in Boston fits into the endless heartache of this world.” —The Boston Globe

“A powerfully compelling portrait… Gessen is uniquely suited to tell the Tsarnaev story: She moved to Boston as a teenage Russian immigrant herself, and, as a result, her observations about what immigrants experience carry specific gravity…No book could ever fully explain why someone would choose to murder innocent people, but Gessen comes as close as we'll ever get. Much as Truman Capote did in his classic "In Cold Blood," Gessen offers compassion for those whose acts are most contemptible, and her explanation of what happened is as complex and as simple as it is to be human. And that is truly frightening.”  —Chicago Tribune

“A Russian-speaking immigrant in Boston, journalist Masha Gessen might be uniquely qualified to investigate Boston Marathon bombers Tamerlan and Dzhokhar Tsarnaev. In The Brothers, she writes with sophistication and nuance about their family’s complicated, nomadic existence… an enthralling and illuminating read.” —Minneapolis Star Tribune, Fave of the Week

“Extraordinary… Gessen, who traveled the globe in search of the secrets of the Tsarnaev family, has produced both a gripping narrative and a stunning piece of investigative journalism… [She] gives us the human side to the story of two young men who must be understood as more than monsters.” —Christian Science Monitor

“This is a story that no one wanted to hear in the days and months after the bombing...Many Americans still may not care to hear it, but that would be too bad, because [The Brothers] is one of the best books I’ve ever read about terrorism and the immigrant experience in America… part social history, part travelog (she traversed the Caucasus and Central Asia while reporting it), and part forensic on family and cultural dysfunction…Gessen wanders among these people, and approaches them with empathy and dark wit... a student of state and stateless terror, [she] is excellent on the varieties of fear it engenders.”  —Newsweek

“[Gessen] uses facts and plausible conjecture to dispel the misconceptions and rumors that have accrued to the Tsarnaevs. No slouch in the sleuth department…this Russian-born journalist assembles a challenging jigsaw puzzle that spans two continents. Her goal is to elucidate and contextualize the brothers’ principled savagery, not to exonerate or mitigate their actions. While several questions remain, the most important being motive, we at least learn the socio-cultural forces that shaped these lone-wolf terrorists.” —Miami Herald

“Gessen…compels us to see the story as part of a much bigger global conflict...[and] is an ideal person to contextualize much of this story, even if her conclusions make us uncomfortable…Most importantly…The Brothers relentlessly observes an overreach of power in response to the bombings…an often painful account of our system’s moral failings, the ways in which we’re inhospitable to those seeking asylum on our shores, and the ways our law enforcement acts in a manner as draconian as law enforcement was in the strife-torn places they fled. That may not be the story we’re looking for, but it is a story we very much need.” —Flavorwire, "A Must Read Book"

“Two parts forensic anthropology, one part activism, The Brothers is a forceful…passionate exploration of the events that preceded and followed the [Boston Marathon bombing]… Gessen is at her best when she takes the reader through the Tsarnaevs’ wildly complicated social history… The origins of their story, itself dizzyingly complex, sets the stage for our understanding of the permanent state of exile and cultural confusion the Tsarnaev clan seemed to endure.” —San Francisco Chronicle

“[Gessen’s] own background…make[s] her an ideal author for this story…her knowledge of Soviet and Russian history, and her reporting on the ground in Dagestan, Kyrgyzstan and Chechnya, lend a resonance and weight … to the Tsarnaev family’s peregrinations in that region…Gessen explains how the history of Chechnya — and the radicalism that took root there — might have affected family members, and she also brings an understanding of the dislocations often faced by immigrants to her account." —Michiko Kakutani, The New York Times

“[The Brothers] is an antidote to prevailing narratives surrounding the Tsarnaev brothers and the Boston Marathon bombing. It is the kind of book that reminds us that there are two sides to every story… With all the context Gessen provides—the history of upheaval in Chechnya, the constant terror of life in Dagestan, the family’s inability to find happiness and steady work in America—it’s hard not to feel as if the Tsarnaev brothers’ decision to bomb the marathon was at least in part the product of historical and cultural forces bearing down on two disenfranchised young men. It’s an unsettling feeling…to find oneself, one hundred and fifty pages in, rooting for Dzhokhar to escape from law enforcement. But that’s the magic of this book: it turns two antagonists of American society into protagonists.” —The Rumpus

“With a cool, clear voice, [Gessen] examines how America’s tremendous dread of terrorism has marred our once-lauded justice system and distorted the legal rights of immigrants in this country… [a] compelling study of Boston Marathon bombers Tamerlan and Dzhokhar Tsarnaev” – Barnes & Noble Review

“Gessen has done valuable work, shoe-leather reporting rather than the reflexive condemnation that flows after any murder, any attack…she is to be commended for humanizing rather than demonizing the brothers.” —Newsday

“Meticulously documented and detailed…Gessen… crafts a dark tapestry, woven of war and loss in Chechnya, Dagestan and the Tsarnaev’s own brutal history" —Providence Journal

“Gessen…paint[s] an evocative picture of the impoverished and strife-torn region the Tsarnaevs left behind, and…the Boston area community that they joined when they immigrated in the early 2000s.” —Kansas City Star

“[Gessen’s] background facilitates a much deeper than usual engagement with the context of the Boston atrocity…We'd prefer, she suggests, to think of terrorism in terms of ideological fanatics carrying out an elaborate and well-thought out plot, because that allows us to externalise the evil. But the Boston bombings actually resulted from a tangled web of frustrations and unhappinesses, in which the personal, the political and the religious were inextricably entwined.” —Sydney Morning Herald

"The Brothers is certainly among the best journalism produced about the bombings." —Pacific Standard

“Meticulously researched and provocative … Gessen asks courageous questions about the dark side of the justice system, providing a vital counternarrative to the account of the bombing given by mainstream media.”  —Publisher’s Weekly

"Gessen makes it eerily plain to see how simply an atrocity can manifest." —Kirkus Reviews


Praise for Words Will Break Cement

Praise for The Man Without a Face

“[An] unflinching indictment of the most powerful man in Russia.” —The Wall Street Journal