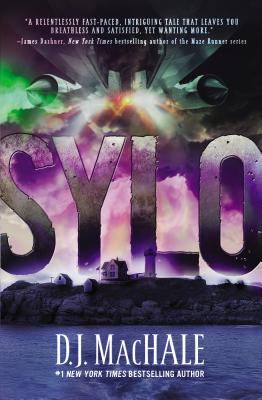 This is book number 1 in the Sylo Chronicles series.

The ultimate action-fueled end-of-the-world conspiracy trilogy from #1 New York Times bestselling author D.J. MacHale
THEY CAME FROM THE SKY
parachuting out of military helicopters to invade Tucker Pierce's idyllic hometown on Pemberwick Island, Maine.
They call themselves SYLO and they are a secret branch of the U.S. Navy. SYLO's commander, Captain Granger, informs Pemberwick residents that the island has been hit by a lethal virus and must be quarantined. Now Pemberwick is cut off from the outside world.
Tucker believes there's more to SYLO's story. He was on the sidelines when the high school running back dropped dead with no warning. He saw the bizarre midnight explosion over the ocean, and the mysterious singing aircraft that travel like shadows through the night sky. He tasted the Ruby and experienced the powers it gave him for himself.
What all this means, SYLO isn t saying. Only Tucker holds the clues that can solve this deadly mystery.
LOOK TO THE SKY
because Pemberwick is only the first stop.

D.J. MacHale is the author of the bestselling book series Pendragon: Journal of an Adventure through Time and Space, the spooky Morpheus Road trilogy, and the whimsical picture book The Monster Princess. He has written, directed, and produced numerous award-winning television series and movies for young people including Are You Afraid of the Dark?, Flight 29 Down, and Tower of Terror. D.J. lives with his family in Southern California.You can visit him online at www.djmachalebooks.com."

"Absolutely un-put-down-able, more exciting than an X-box and a rollercoaster combined."--Kirkus, starred review

"If you're a fan of The Maze Runner and Alex Rider, you might want to pick up SYLO... A fast-paced read and a huge cliffhanger." --EW.com

"[An] extremely high-octane story that's the equivalent to a summer movie blockbuster." --Booklist

"This action-fueled, end-of-the-world-as-we-know-it adventure... should have teen reader clamoring for the next installment." --VOYA

"MacHale pens some terrific and unique action scenes... will leave readers hungry for the next installment." --SLJ

"I'm not sure anyone does suspense quite like D.J. MacHale. I ripped through the pages of SYLO, a relentlessly fast-paced, intriguing, expertly-written tale that leaves you breathless and satisfied, yet wanting more. Highly recommended." James Dashner, New York Times bestselling author of the Maze Runner series

“SYLO will have your pulse racing and your head spinning. Make plans to stay up all night finishing it." Michael Grant, New York Times bestselling author of the Gone series

“Packed with thrilling chases, daring escapes, and breathtaking action sequences, SYLO will grab the reader's attention from the first page and not let go until the final, stunning conclusion!”—Michael Carroll, author of The Quantum Prophecy

“I have no fingernails left! I chewed off every last one of them while I fretted over the fate of Tucker and his friends. Well done, Mr. MacHale."—PJ Haarsma, author of the Softwire series