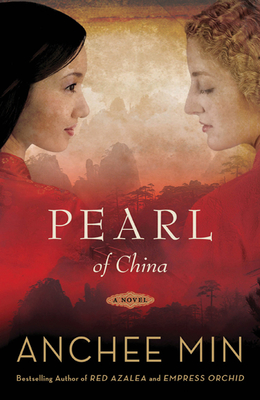 “Anchee Min creates a story of friendship and politics in this fictionalized account of Pearl Buck and young Willow. The street urchin and the daughter of an American missionary share both the simplicity of childhood and the conflict of the Chinese revolution. The two are destined to be separated by politics; however, their friendship never falters and lives on in the Buck's writings.”
— Wendy Foster Leigh, The King's English, Salt Lake City, UT

It is the end of the nineteenth century and China is riding on the crest of great change, but for nine-year-old Willow, the only child of a destitute family in the small southern town of Chin-kiang, nothing ever seems to change. Until the day she meets Pearl, the eldest daughter of a zealous American missionary.
Pearl is head-strong, independent and fiercely intelligent, and will grow up to be Pearl S Buck, the Pulitzer- and Nobel Prize-winning writer and humanitarian activist, but for now all Willow knows is that she has never met anyone like her in all her life. From the start the two are thick as thieves, but when the Boxer Rebellion rocks the nation, Pearl's family is forced to leave China to flee religious persecution. As the twentieth century unfolds in all its turmoil, through right-wing military coups and Mao's Red Revolution, through bad marriages and broken dreams, the two girls cling to their lifelong friendship across the sea.

In this ambitious and moving new novel, Anchee Min, acclaimed author of Empress Orchid and Red Azalea, brings to life a courageous and passionate woman who loved the country of her childhood and who has been hailed in China as a modern heroine.

Anchee Min was born in Shanghai in 1957. At seventeen she was sent to a labor collective, where a talent scout for Madame Mao's Shanghai Film Studio recruited her to work as a movie actress. She moved to the United States in 1984. Her memoir, Red Azalea, was an international bestseller, published in twenty countries.

“In [Min's] latest book, Pearl of China, she creates a fanciful yet believable world for the Nobel laureate Pearl Buck through the voice of an imagined Chinese woman, Willow Yee, whose unwavering friendship with Buck has endured the test of turbulent times in Chinese history… Min skillfully blends real historical figures ...with fictional characters to authenticate the story's social and political context… The book presents a welcome addition to Min's long list of strong female characters, and pays worthy homage to Pearl Buck's legacy.” - San Francisco Chronicle, Best of 2010 Books by Bay Area Authors

“[Anchee] Min, a prime example of an indomitable Chinese woman, has made it her mission to reveal the truth about the lives of women in China, including Madame Mae, Empress Tzu Hsi, and now Buck… Ardently detailed, dramatic, and encompassing, Min's fresh and penetrating interpretation of Pearl S. Buck's extraordinary life delivers profound psychological, spiritual, and historical insights within an unforgettable cross-cultural story of a quest for veracity, compassion, and justice.” - Booklist, starred review

"Min... paint[s] historical canvases, casting a series of novels in the primary hues of folk art." - New York Times Book Review “In Pearl of China, Anchee Min...spins a fictional account of Buck's early life in China and her imagined friendship with the narrator, a young Chinese girl named Willow Yee. The two women form a spiritual and emotional bond that resists political turmoil, the violence of civil war, romantic rivalry and eventually, the distance imposed by communism... Min echoes Buck's talent for showing compassion and empathy toward her characters, and like her, reveals the power and dignity contained in the lives of ordinary people.” —Associated Press

“Pearl of China is a loving tribute to Buck and a unique peek into the hearts and lives of the Chinese people who knew her. As with all of her books, Min - like Buck before her - exposes the cruel, isolating existence that China's rulers inflicted on much of the country's population during the different decades that the two women lived there. And both women showed the inspiring, courageous ways in which even the most besieged of the lowest classes maintained their wit and humanity.”—Oregonian

“In this ambitious and moving novel, the acclaimed author of Empress Orchid and Red Azalea brings to life the woman who loved the country of her childhood and who has been hailed in China as a modern heroine.” —Washington Times “A gifted and lyrical writer.” —Los Angeles Times “In this excellent interpretation of Pearl's story from a Chinese perspective told with a haunting quality only Anchee Min can deliver, the bestselling author of Red Azalea and Empress Orchid again focuses her attention on influential women of her native China...this rewarding read passes far too quickly.” —Bookreporter.com