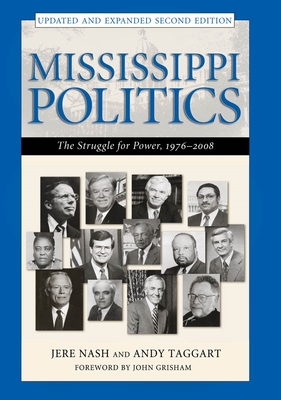 
On Our Shelves Now
Originally published in 2006, Mississippi Politics quickly became the definitive work on the state's recent political history, campaigns, legislative battles, and litigation, as well as how Mississippi shaped and was shaped by national and regional trends. A central theme of the 2006 edition was the state's gradual transition from a Democratic surety to a Republican stronghold. For this updated edition, authors Jere Nash and Andy Taggart examine the aftermath of the 2007 gubernatorial and 2008 presidential elections--and all the fireworks in between. This new edition adds a chapter covering the last two years and includes analyses of the 2007 and 2008 statewide, legislative, and federal elections; the resignations of Senator Trent Lott and Congressman Chip Pickering; the indictments of Richard Scruggs and other prominent lawyers; President Barack Obama's influence on the state's 2008 voting dynamics; and the election of House Speaker Billy McCoy.
Jere Nash, a Democrat, is a consultant whose political positions have included executive director of Mississippi First, deputy state auditor, and chief of staff for the Office of the Governor. He has consulted on numerous state and local campaigns. Andy Taggart, a Republican, currently operates his own law firm, focusing on business counseling and consulting with emphasis on government and health. He has served as executive director of the Mississippi Republican Party, chief of staff for the Office of the Governor, and president/CEO of the Mississippi Technology Alliance.