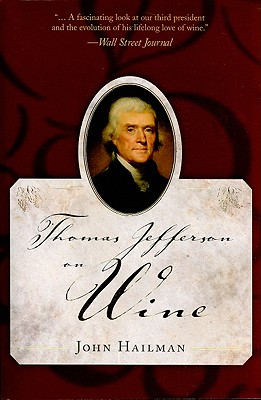 
On Our Shelves Now
In Thomas Jefferson on Wine, John Hailman celebrates a founding father's lifelong interest in wine and provides unprecedented insight into Jefferson's character from this unique perspective. In both his personal and public lives, Jefferson wielded his considerable expertise to influence the drinking habits of his friends, other founding fathers, and the American public away from hard liquor toward the healthier pleasures of wine. An international wine judge and nationally syndicated wine columnist, Hailman discusses how Jefferson's tastes developed, which wines and foods he preferred at different stages of his life, and how Jefferson became the greatest wine expert of the early American republic. Hailman explores the third president's fascination with scores of wines from his student days at Williamsburg to his lengthy retirement years at Monticello, using mainly Jefferson's own words from hundreds of immensely readable and surprisingly modern letters on the subject. Hailman examines Jefferson's five critical years in Paris, where he learned about fine wines at Europe's salons and dinner tables as American Ambassador. The book uses excerpts from Jefferson's colorful travel journals of his visits to France, Italy, and Germany, as well as his letters to friends and wine merchants, some of whose descendants still produce the wines Jefferson enjoyed. Vivid contemporaneous accounts of dinners at the White House allow readers to experience vicariously Jefferson's Champagne diplomacy. The book concludes with an overview of the current restoration of the vineyards at Monticello and the new Monticello Wine Trail and its numerous world-class Virginia wineries. In Thomas Jefferson on Wine, Hailman presents an absorbing and unique view of this towering historical figure.
John Hailman (1942-2021) was a retired federal prosecutor from the US attorney's office in Oxford, Mississippi. He was an inaugural Overby Fellow in Journalism and an adjunct professor of law at the University of Mississippi. He is author of several books, including Foreign Missions of an American Prosecutor: From Moscow to Morocco and Paris to the Persian Gulf; From Midnight to Guntown: True Crime Stories from a Federal Prosecutor in Mississippi; Return to Guntown: Classic Trials of the Outlaws and Rogues of Faulkner Country; and The Search for Good Wine: From the Founding Fathers to the Modern Table, all published by University Press of Mississippi.