Bank Robbers and the Detectives (Paperback) 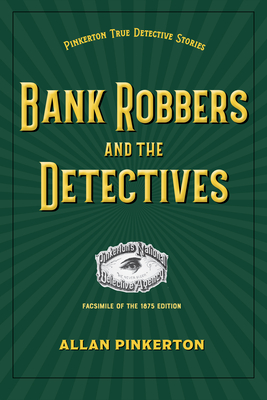 Bank Robbers and the Detectives (Paperback)

The Kent State University Press is excited to reissue these classic true crime detective stories by Allan Pinkerton, the Scottish American detective and spy who founded the Pinkerton National Detective Agency in 1850. His agency was the largest private law enforcement organization in the world at the height of its power, and its well-known logo of a large, unblinking eye actually served as inspiration for the term "private eye."

In Bank Robbers and the Detectives, Pinkerton receives a telegram that reads, "First National Bank robbed, please come, or send at once" from Thomas Locke in Somerset, Michigan. He sets off to investigate the crime. After journeying to the quaint town in a blizzard, the detective learns that $65,000 of treasury bonds, notes, and cash had disappeared from the bank's vault overnight. Only one man knew the combination: the bank's cashier, Mr. Norton. When Pinkerton's subsequent examination of the crime scene reveals no signs of forced entry, it starts to look like Mr. Norton committed the crime.

But if Pinkerton has learned anything during his three decades of detective work, it is that initial appearances are often deceiving, and he narrows the investigation down to three suspects close to the cashier. However, he soon discovers that the promise of exorbitant wealth can tempt even the most honorable man to commit treacherous crimes.

Allan Pinkerton (1819-1884) was born in Scotland and immigrated to the United States in 1842. Settling in the Chicago area, his first career was as a cooper. While wondering in the woods looking for wood to make barrel staves, he came across some counterfeiters and helped in their arrest. That led to Pinkerton being appointed as police detective in Cook County, Illinois, and later forming his own company--the Pinkerton National Detective Agency. Pinkerton produced numerous books based on his work and that of his agents. While the books no doubt reflect his views, many historians believe he used a ghostwriter.