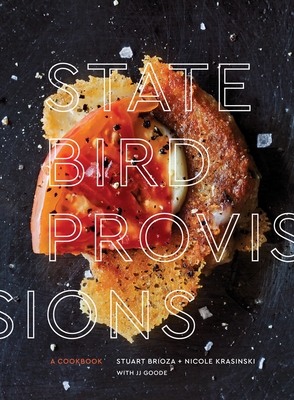 
The debut cookbook from one of the country's most celebrated and pioneering restaurants, Michelin-starred State Bird Provisions in San Francisco.

Few restaurants have taken the nation by storm in the way that State Bird Provisions has. Inspired by their years catering parties, chefs Stuart Brioza and Nicole Krasinski use dim sum style carts to offer guests small but finely crafted dishes ranging from Potato Chips with Crème Fraiche and Cured Trout Roe, to Black Butter-Balsamic Figs with Wagon Wheel Cheese Fondue, to their famous savory pancakes (such as Chanterelle Pancakes with Lardo and Maple Vinegar), along with a menu of more substantial dishes such as their signature fried quail with stewed onions.

Their singular and original approach to cooking, which expertly blends seemingly disparate influences, flavors, and textures, is a style that has influenced other restaurants throughout the country and is beloved by diners, chefs, and critics alike. In the debut cookbook from this acclaimed restaurant, Brioza and Krasinski share recipes for their most popular dishes along with stunning photography, and inspire readers to craft an unforgettable meal of textures, temperatures, aromas, and colors that excite all of the senses.
STUART BRIOZA and NICOLE KRASINSKI are the chef/owners of State Bird Provisions and The Progress in San Francisco. JJ GOODE is a Brooklyn-based food writer and the coauthor of the books A Girl and Her Pig with April Bloomfield, Morimoto with Masaharu Morimoto, Truly Mexican with Roberto Santibanez, and Pok Pok with Andy Ricker.
“When people talk about iconic California restaurants they talk about places like Chez Panisse and Zuni Café. I’ll confidently add State Bird Provisions to that list. Each offers an experience that defines a special time and place in American dining. And all are guided not just by incredibly talented chefs but by amazing human beings. The book in your hands is a taste of what makes Stuart and Nicole's one-of-a-kind gem so special—from the inventive yet approachable recipes to the heartfelt writing. State Bird is more than a restaurant, it’s a way of looking at life. And this book is its manual.”
—Andrew Knowlton, deputy editor of Bon Appétit


“Stuart Brioza and Nicole Krasinski exude soulfulness and authenticity in their cooking; this book is a true expression of the restaurant they created, which has changed the landscape of American dining.”
—Kyle Connaughton, chef/owner of SingleThread Farms and author of Donabe: Classic and Modern Japanese Clay Pot Cooking


“With State Bird Provisions, Stuart and Nicole have given the city of San Francisco a gift of culinary joy and delight. Not since childhood have we experienced so much fun dining out, and rarely are we lucky enough to find such an authentic and delicious expression of time and place. Now with State Bird Provisions they have given us yet another gift; a guide to bringing some of that magic into our homes. Thank you!”
—Kevin Farley and Alex Hozven, owners of Cultured Pickle Shop


“I love Stuart and Nicole’s food, and State Bird Provisions has become one of my favorite restaurants in the world. So, no surprise that this is my new favorite cookbook. The bold techniques, outstanding ingredients, and fantastic flavors—they’re all here. What an absolute pleasure this book is.”
—Hugh Fearnley-Whittingstall, writer, broadcaster, activist, and creator of River Cottage

"Beautifully written and photographed, this collection will inspire generations of diners and chefs to come."
—Publishers Weekly, Starred Review

"[State Bird Provisions] is a pretty, fun-to-read cookbook, starting with the chatty backstory to the restaurant, which famously serves its food in dim sum carts."
—Los Angeles Times

"The book itself does justice to the origin tale fans know well, and lends insight to the couple’s critical thinking approach to freshness, to waste, and to creativity. ... The photographs, just like the recipes, are gorgeous."
—Chefsfeed