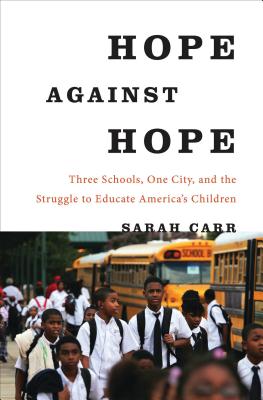 By Sarah Carr
Special Order -- Email or Call for Availability

Geraldlynn is a lively, astute 14-year-old. Her family, displaced by Hurricane Katrina, returns home to find a radically altered public education system. Geraldlynn's parents hope their daughter's new school will prepare her for college--but the teenager has ideals and ambitions of her own.

Aidan is a fresh-faced Harvard grad drawn to New Orleans by the possibility of bringing change to a flood-ravaged city. He teaches at an ambitious charter school with a group of newcomers determined to show the world they can use science, data, and hard work to build a model school.

Mary Laurie is a veteran educator who becomes principal of one of the first public high schools to reopen after Katrina. Laurie and her staff find they must fight each day not only to educate the city's teenagers, but to keep the Walker community safe and whole.

In this powerful narrative non-fiction debut, the lives of these three characters provide readers with a vivid and sobering portrait of education in twenty-first-century America. Hope Against Hope works in the same tradition as Random Family and There Are No Children Here to capture the challenges of growing up and learning in a troubled world.

Sarah Carr has written about education for the last twelve years, reporting on the growth in online learning in higher education, the battle over vouchers and charter schools in urban districts, and the struggle to educate China's massive population of migrant children. Her work has been honored with numerous national awards and fellowships, most recently a Spencer Education Journalism Fellowship at Columbia University. She lives in New Orleans.

“[A] nuanced, concrete picture focused on individuals seeking to make the reform regime work for the children in their schools. The book is a tremendous achievement, and should be required reading on all sides of these debates.” —Bookforum

“Carr's reporting is some of the best education reform journalism to date…For anyone seeking to understand U.S. education and education reform, [her] story of New Orleans is an essential place to start.” —The Wilson Quarterly

“Carr deftly explores the complexities of school reform…[She] goes beyond New Orleans to examine the broader issues of education reform in urban areas throughout the nation as students and parents are caught in a clash of cultures and ideas on how to repair failing school systems and educate inner-city children.” —Booklist (starred review)

“Carr's decision to view the situation through the eyes of three people with a stake in the outcome…humanizes the story, and places Hope Against Hope in the same class as other groundbreaking books such as Jonathan Kozol's Savage Inequalities and Alex Kotlowitz's There Are No Children Here.” —Bookpage

“[W]ith journalistic precision and a remarkably unflinching objectivity… Carr clearly delineates the strengths and weaknesses of both sides, admirably delving into the complex racial, political and social ethos underpinning each, and melding historical context and hard statistical data along the way…[W]hat makes the book special is its focus on the experiences of the teachers, students and administrators that form the true core, the heart, of Hope Against Hope.” —Philadelphia City Paper

“It's work like this that makes journalism truly matter, that makes clear that reportage is not merely about fact and argument and theory, but about human lives in the balance. In Hope Against Hope, Sarah Carr has taken an open mind and a careful eye to the delicate, complicated issue of public education and the fading American commitment to equality of opportunity. She does so not by embracing ideological cant or political banter, but by following people through the schools of New Orleans, a city that is trying desperately to reconstitute and better itself after a near-death experience. Don't embarrass yourself by speaking further on American education without first reading this.” —David Simon, creator of The Wire and Treme

“With grace and profound intimacy, Sarah Carr immerses us in the lives of a group of students, teachers and administrators in New Orleans, ground zero for the debate over school reform, and lays bare all that we face as we try to strengthen our schools. Riveting. Empathic. Incisive. Hope Against Hope is storytelling at its absolute finest.” —Alex Kotlowitz, author of The Other Side of the River and There Are No Children Here

“For all the charts, graphs, and figures that attempt to explain education reform, a good story is more powerful. Sarah Carr's narratives about a student, a teacher, and an administrator are captivating and evocative. This is an important book about education writ large.” —Gloria Ladson-Billings, author of The Dreamkeepers

“Of the many dreams and schemes for upgrading New Orleans after Katrina, the controversial, convulsive overhaul of the city's public schools is the one that really happened. Sarah Carr offers readers a ringside seat on an attempted revolution. No one who cares about public education in America can afford to ignore this balanced and vivid account.” —Jed Horne, author of Breach of Faith: Hurricane Katrina and the Near Death of a Great American City

“If you read just one book about contemporary education reform, it should be Sarah Carr's Hope Against Hope. Geraldlynn, Aidan, and Mary Laurie are unforgettable characters, whose complex lives challenge the talking points and political pieties so common to the debate over public schools, poverty, and race. Carr has set a new bar for all of us writing about education in America.” —Dana Goldstein, education journalist and Schwartz Fellow at the New America Foundation

“Hope Against Hope compels us to look beyond the slogans and labels of competing interest groups to see the issues at the front lines of American education. For those who are interested in genuinely understanding--and moving beyond--the current impasse on school reform, this book is a must read.” —Pedro Noguera, author of City Schools and the American Dream

“As the nation looks to New Orleans as the model for education reform, we would do well to read this book closely. Sarah Carr's portrait of these changes, at once analytical and compassionate, reveals the human tolls and triumphs of this movement. Whether you support or oppose education reform, Hope Against Hope is necessary reading.” —Lolis Eric Elie, co-director of the documentary Faubourg Treme

“A balanced account of the growing charter-school movement in post-Katrina New Orleans. Detailed and thoughtful.” —Kirkus