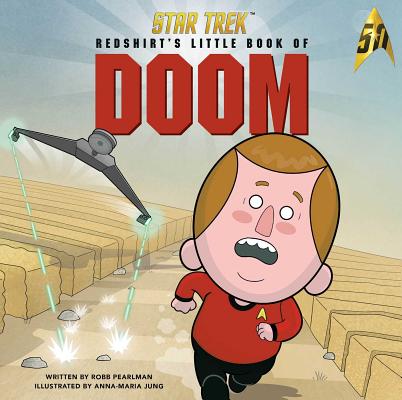 OMG. This is hysterical.

This new book from the author of Fun with Kirk and Spock casts a wry, satirical eye on one of the most popular sci-fi sagas of all time.

In the successful tradition of adult pop culture humor books like Stuck on Star Trek, A Very Klingon Christmas, and the author’s own Fun with Kirk and Spock, Star Trek: Redshirt's Little Book of Doom casts a wry, satirical, and reverential eye on one of the most popular and well-loved television and film franchises of all time.

It’s common knowledge that if a Star Trek character is wearing a red shirt, chances are he’s going to die. But there are so many other ways red shirt–wearers can be humiliated. By mining the humorous depths of Star Trek's most popular in-jokes—that anyone wearing a red shirt is doomed—this book chronicles the many ways one Starfleet officer's day can be ruined.

Poor Red Shirt just can’t catch a break. Whether he's dealing with real-life problems we all face like accidentally mixing whites with colors or being stuck sitting behind a very tall Gorn in a movie theater or trying out a standup comedy routine in front of an audience of surly Klingons, our hapless hero faces a universe-sized number of obstacles.

Featuring hilarious illustrations and witty gags that both pop culture fans and Star Trek fans will adore, Star Trek: Redshirt's Little Book of Doom is a fresh new take on one of the most beloved sci-fi sagas of all time.

Robb Pearlman is the author of two Star Trek books: Fun with Kirk and Spock and The Wit and Wisdom of Star Trek. He has had many sold-out Star Trek book signings at San Diego ComicCon, New York Comic Con, The Official Star Trek Convention in Las Vegas, and BookCon. Robb is the author of other pop culture, humor, and children’s books, including the Unicorns and Zombies titles, Nerd Haiku, Spoiler Alert, The Q Guide to Sex and the City, and Game of Thrones: In Memoriam. He lives in New York City, New York.

Anna-Maria Jung is a full-time nerd and freelance illustrator from Graz, Austria. She finished a master's degree in Illustration in NYC and is currently living and working in Austria. She has published various comics and is known for her T-shirt designs covered with all kinds of nonsense. For more information go to annamariajung.com

"Among Star Trek fans, it’s well-known lore that any character wearing a red shirt likely isn’t going to be around—one way or another—very long. By playfully plumbing the dark humor of that premise, Robb Pearlman’s Star Trek: Reshirt’s Little Book of Doom (Insight Editions) looks at the many humorous, humiliating ways a lowly Starfleet officer’s day can be ruined."

"In the successful tradition of adult pop culture humor books like Stuck on Star Trek, A Very Klingon Christmas, and the author's own Fun with Kirk and Spock, Star Trek: Redshirt's Little Book of Doom casts a wry, satirical, and reverential eye on one of the most popular and well-loved television and film franchises of all time."

“A fun little illustrated book, this one will definitely be appreciated by Trek fans who understand the red-shirt heartache.”